Jaye Beele of the Grand Rapids Press has lunch with Garrett Oliver, master of brewing at Brooklyn Brewery and author of “The Brewmaster’s Table.”

Beele reports they had “mild Bavarian brat weisswurst with sweet Bavarian mustard and knockwurst served with Senf (German deli mustard), reubens, German potato salad and sauerkraut,” but doesn’t mentioned what they had to drink!

He does, however, repeat much of the discussion about beer, including Oliver’s theory that the resurgence in sales of beer with flavor isn’t an anomoly, but a matter of “getting back to normal.”

And beer is food.

Arriving in Asheville, N.C. – a decidely beer-hip town – with just one beer, its flagship No. 9, and only on draft, Vermont’s Magic Hat Brewing creates an immediate buzz.

2theadvocate.com has a solid feature on Louisiana’s Abita Brewing Co.

News includes the fact that Fleur-de-lis Restoration Ale has so far raised $400,000 for hurricane relief.

As already reported, business thrives despite the fact that New Orleans’ population has been cut in half. Although Abita sells its beer in 32 states, New Orleans is still its most important market.

Most of its beers are designed to be paired with local cuisine, to keep Abita “Louisiana True,” president David Blossman said in the story.

“From the beginning, we made a concerted effort to be a part of our (Louisiana’s) lifestyle,” Blossman said. “If we were just trying to make money, we would be just making our amber beer.”

These days that’s another reason for people outside Louisiana to buy the beer.

Imagine the Wall Street Journal with color pictures (wait, they do that from time to time) to accompany its “Fresh Hops” story of last week.

Then you’ve got Jay Brooks’ story and photos from the Russian River/Moonlight Brewing hop harvest on Monday.

“So You Think You Could Be . . .” is an occasional series that gives LaCrosse Tribune reporters a new and interesting job for a day. Some jobs will be dirty. Some will be fun. And others will be just plain weird.

That’s why Joan Kent found herself inside City Brewery, which is hardly a quaint little startup. City Brewery used to be a Heileman plant, cranking out Old Style when that beer was the best seller in Chicago (take that, Miller and Bud).

I would have done more work during my day at City Brewery, but nothing weighed less than 50 pounds.

Everything inside the old brick walls is big. Tubs with capacities like 1,970 barrels. Pipes that seem to run for miles in a maze among the several buildings. Freight cars full of grain. Tanker trucks full of corn syrup.

The brewery is a weird mixture of tradition and modern manufacturing.

The tasting part, however, required only light lifting.

The latest in Stone Brewing’s series of charity auctions to celebrate its 10th anniversary closes Friday, but bids are already apporaching $1,000.

The dinner for eight with Stone founders Greg Koch and Steve Wagner features six courses and six vintage Stone beers. The package also includes an invitation for one person to be a guest at a tasting of Stone 02.02.02 Epic Vertical Ale.

The charity auctions have already raised $20,371.

– AleSmith Brewing in San Diego is ready to release Barrel-Aged Old Numbskull 2004. Individually numbered bottles will be available for purchase only from the brewery Sept. 1 (next Friday), beginning at 3 p.m. Due to the rare nature of this beer, purchases will be limited to two bottles per person. A release party will follow in the back of the brewery [AleSmith is located at 9368 Cabot Drive, 858-549-9888]

– Saint Arnold Brewing in Houston will celebrate Oktoberfest in the brewery Oct. 13-14, but its Oktoberfest beer will be ready Sept. 1. Saint Arnold Oktoberfest was introduced into the brewery’s rotation of seasonal offerings in 1997 and has been judged among America’s best. It was recognized with the Bronze Medal in the Scottish Ale category at the Great American Beer Festival in both 2001 and 2000.

– Spoetzl Brewery, also in Texas, continues the countdown toward its 100th anniversary in 2009 with the release of Shiner 97, a Bohemian Black Lager that Shiner 96, a Marzen-style ale that debuted during last year’s Oktoberfest. “This is the second year of our anniversary beer concept and we want to showcase our brewing heritage, our German and Czech pedigree and our history of brewing in Texas,” said Gambrinus CMO Shamus Hanlon. 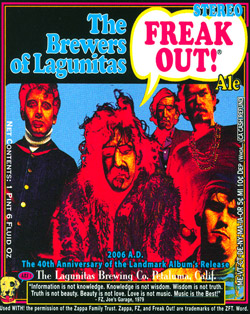 Compared to the heat Miller Brewing has drawn for using famous rock ‘n’ roll artists on a series of cans, it looks like small breweries – in this case both from Northern California – are on to something.

Lagnunitas Brewing Co. began shipping Freak Out! Ale in 22-ounce bottles earlier this month “in celebration of the 40th anniversary of the release of the first album by Frank Zappa and the Mothers of Invention.”

Lagunitas founder Tony Magee obtained the permission of the Zappa Family Trust to use the original album art as the bottle label. He plans to do an entire series commemorating the release of Zappa albums. So look for “Absolutely Free” next summer.

Freak Out! Ale is a beer of substance (7.3% abv) but – thank goodness – is not as demanding as Zappas’ double album. It has plenty of hop character – citrusy, resiny, gritty flavors and solid bitterness – to balance hefty malt sweetness (fruit and caramel).

Lagunitas also announced that its Imperial Red Ale (also not for sissies), previously sold only in 22-ounce bottles, is available in six-packs of 12-ounce bottles.

You might have missed the report a couple of weeks ago in the Sierra Sun that Truckee, Calif., is getting a new brewery.

Truckee Craft Brewing Co. should be up and running by late this year or early next. What most of you will consider news is is not that another brewpub is opening, or that brewing is returning to Truckee (which has a long brewing history).

The news is Todd Ashman is returning to brewing.

Take a minute to think about that, and perhaps say a blessing to the beer gods.

Most remember Ashman for his innovative (and award-winning) beers at Illinois brewpub Flossmoor Station. He also brewed at Titletown Brewing in Green Bay before going to work for Rahr Malting/Brewers Supply Group, which sells ingredients to craft breweries.

Ashman officially starts in Truckee at the beginning of December. He says that capacity constraints will limit him to keeping five or six beers on tap, “maybe more once we get things in rotation.”

We can hardly wait.

A modern-day brewpub operated in Truckee in the 1990s, but the more interesting history goes back to the 19th century. According to Truckee historian Gordon Richards the Boca Brewery – built in 1875 – sold its beer around the world and was a popular drink at the 1883 World’s Fair in Paris, France.

The brewery was ideally located with easy access to spring water and ice, but the mostly German brewers often found themselves feuding with French Canadian loggers across the Truckee River. The Boca Brewery burned in January of 1893.

Advertising Age reports that Anheuser-Busch is getting into the content business.

The country’s largest brewer is launching its own in-house film and TV production company that will make humorous shorts and sitcom-type programs to be broadcast over the internet and to cellphones, according to four people familiar with the matter, and could branch into full-length films.

Like anything A-B does, don’t expect them to settle for halfway. But does that mean they’ll tap into the viral magic of the ‘net? So far, Miller’s “Man Laws” campaign seems to be attracting a lot more attention than A-B’s “Here’s to Beer.”

A-B might take a hint from Smirnoff. You’ll find its “Tea Partay” video at YouTube and of this morning had been viewed more than 800,000 views (in less than three weeks). 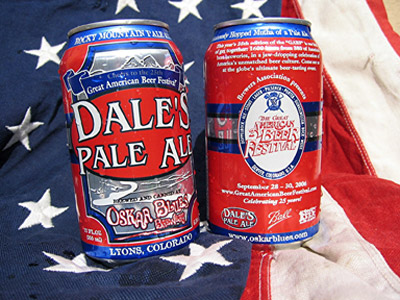 You can already find special cans of Dale’s Pale Ale in many of the 13 states that Oskar Blues (in Lyons, just up the road from Boulder) sells its beer. The cans feature the GABF logo and information on the festival, scheduled for Sept. 28-30 in Denver.

The Brewers Association and Boulder Beer teamed up to produce a beer commemorating the 25th GABF. Boulder Beer also brewed a special high gravity ale to celebrate the inaugural GABF in 1982.

Boulder Beer was one of the original 22 breweries at the first GABF and has been a participant every year since.

Boulder will roll out its “GABF 25th Year Beer” in 11 states in early September – and, of course it will be available at the festival. it will first be served at Boulder Beer’s 27th anniversary party, The Goatshed Revival, Aug. 26 from 1 – 8 p.m. The Goatshed Revival is an annual outdoor celebration with proceeds benefiting the local Habitat for Humanity.

Among the e-mail questions we see most often is: “What are the top ten selling beer brands in the USA?”

Since the Information Resources Inc. that indicate craft beer sales are on fire also list the best selling beers overall we can provide an up-to-date ranking..

These are sales in outlets that IRI tracks, mostly supermarkets with at least $2 million in sales, plus some convenience stores and retail liquor stores. But even if you could count everything else the order would be unlikely to change.

Most of the stories are by Lucy Saunders (Beerkcook and Grilling With Beer), with plenty of information about pairing beer and food when dining and cooking with beer.

A Cornish brewery, Skinners Brewery, has linked up with the Fishermen’s Mission to help celebrate its 125 years of supporting fishermen and their families in times of hardship, need, accident, illness or disaster at sea.

The brewery is producing a limited edition of at least 2,000 bottles of Starry Gazey Ale for the mission.

There’s been some chatter in the beer ranks about how the ban on flying with liquids, but hardly compares to the concerns of wineries.

Domaine Carneros, for example, is providing free insulated foam packaging for consumers who previously could carry a few bottles on board a plane.

The story also has nice information about the temperaturs to expect in the cargo hold.