An investment group led by J. Smoke Wallin has finalized the purchase of Napa Smith Brewery & Winery, making it part of a family of companies which includes Pelican Brands. Napa Smith Beer is currently in 17 states, and will be available nationally by the summer of 2011. Earlier this year, Napa Smith appointed Pelican Brands as its exclusive sales representatives in the United States.

For the press release announcing the deal had closed:

J. Smoke Wallin, Chairman & CEO of Pelican Brands and Napa Smith Holdings, said, “The craft beer business is the fastest growing category of beverage alcohol in America. Napa Smith has all the right attributes to become one of the few truly global brands of craft beer – amazing beer from one of the most respected names in the craft brewing industry, distinctive packaging, Napa terroir. These attributes combined with our Pelican Brands global distribution capability, experienced management team and our access to capital give us all the necessary elements to achieve great success.” Wallin continued, “This acquisition is a great strategic fit combined with Pelican Brands as we build a global sales and brand platform, of both owned and agency brands. We look forward to building Napa Smith into an iconic craft beer brand with President Steve Morgan and Master Brewer Don Barkley.”

Steve Morgan, President & COO of Napa Smith Holdings stated, “This is a very positive development for our business. In 2010 Napa Smith – through Pelican’s sales and distribution platform – has expanded into 17 states. With the capital, resources and relationships that Pelican brings to the mix, our beer will be available nationally by mid 2011. Napa has become known world-wide for great wines, and deservedly so. We are proud to hand-craft our beer here in Napa Valley with the same level of quality and attention to detail that built Napa’s global reputation.”

Don Barkley, Master Brewer said, “I’m doing what I love to do – brewing great beer. Smoke and the whole Pelican team are my kind of people. They appreciate the importance of brewing beer right. At the same time, they bring scale and resources that will help Napa Smith reach many more thirsty consumers, which is something I’m passionate about!”

Tour de Fat is free to attend, but money raised from the sale of New Belgium beers and merchandise helps local organizations continue their good work of bicycle advocacy and environmental stewardship. In 2008, Tour de Fat broke the $1 million mark and the grand total now stands at more than $1.5 million. To see videos from some of the 2010 tour stops visit http://www.tour-de-fat.com.

In addition to raising money at every stop, Tour de Fat also swapped 13 cars for bikes. This year marked the fourth year that Tour de Fat hosted the car-for-bike swap, where someone in each city trades in his or her vehicle for a hand-built commuter bike. The volunteer then commits to living car-free for the next year.

For example, in Chicago, New Belgium selected “Iggi” Ignaczak to become the first car swapper of the season. Iggi is an avid cyclist who is not afraid to ride his bike in the 16-below temperatures of a Chicago winter. His work commute now consists of six miles of bike riding each day, plus a 35-minute train ride, instead of the 18-mile, one-hour and 20-minute drive he had before. Iggi even built a bike trailer for his dog Winston, so he can go along on some of his journeys.

“People always ask me what I’m doing out on a bike in 10 degree weather,” said Iggi. “I tell them the story of Tour de Fat and how I traded in a car for the bike. Almost always, if not met with a response of ‘oh, you’re crazy’, people are impressed.”

“I can almost see the gears in their heads grinding, and considering if that is something they can do themselves,” he added. “I always say that if I can do it, so can they.”

In addition to getting thirteen cars off the road, Tour de Fat aims to minimize its impact by composting and recycling waste. The waste diversion rate for this season was 91 percent. Other Tour de Fat sustainable initiatives included traveling with a solar-powered stage, using biofuel sourced from recycled waste oils for trucks and transport, and having all vendors operate off the grid.

“We join our nonprofit partners in thanking all attendees,” spokesman Bryan Simpson said for the press release. “We’d like to high five each person who supported our efforts, but since that’s a little tricky, we’d like to thank everyone for their tremendous support.” 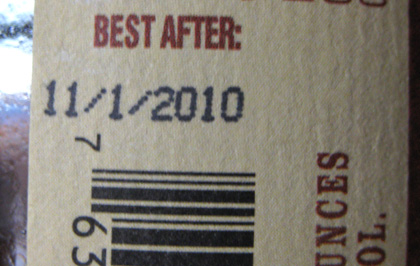 Must mean it is time to open the 2009 vintage. Heck, turns out we could have done that in November.

This one really belongs at Real Beer for the Holidays but that blog isn’t set up to accommodate videos.

Happy holidays. If you go to the Grolsch website there’s a chance to win a case of beer.

The Tsingtao Brewery — China’s largest — has agreed to buy the Shandong Yinmai Beer Co., the third brewery it has taken over in two years.

Wang Fan, vice chairman of Tsingtao Brewery, said the deal would consolidate Tsingtao Beer’s dominance in the market in Shandong amid fierce competition. Yinmai will continue to make Yinmai beer. This is different from Tsingtao’s takeover of two other local breweries of Yantai Beer and Baotu Spring Beer, whose trademark beers disappeared.

Tsingtao Brewery, which was founded in 1903 in Qingdao City, is best known for the internationally distributed Tsingtao beer.

The parent companies of two Denver-based breweries, Wynkoop Holdings and Breckenridge Holding Co., announced they will enter into a 50-50 joint venture early next year.

Spokespersons emphasized that Wynkoop, which owns the Wynkoop Brewing Co. and six other restaurants, and Breckenridge, which operates Breckenridge Brewery and five brewpubs, will not merge their identities, their brands or their staffs. The new joint venture will have one board of managers overseeing it.

The agreement will allow the two companies to leverage each other’s facilities and expertise as both look to expand certain aspects of their businesses.

Wynkoop will use Breckenridge’s brewing facility to grow its year-old beer-canning efforts, and Breckenridge will employ Wynkoop officials’ expertise in the restaurant business as it seeks to increase the number of ale-house restaurants it operates.

“We get to each develop our own identities and continue to grow and improve them,” Wynkoop spokesman Marty Jones said. “Together we have more power to do good things for the craft-brewing industry in the state.” He said leaders of the two companies began talking about a joint venture as long as four years ago.

“It’s not a merger. We will not be co-branding beers. We do want to maintain our individual brand identities,” said Terry Usry, Breckenridge public relations manager. “We’ll feed off the synergies we have. In many ways, the two concepts are very much alike.”

Breckenridge president Ed Cerkovnik made the same point. “This is a marriage of opportunity and not necessity,” he says. “Both companies want to grow and expand. The combined company provides us with a platform to more effectively and rapidly do that.”