A traditional Edinburgh pub has brought McEwans cask 80/- ale back to life.

Scottish & Newcastle ended a century old tradition by phasing out the at the end of 2006. Athletic Arms contacted microbreweries in a bid to produce a replacement that was as near to the original as possible.

Eric Milligan, a regular in the pubs said: “The 80/- was a very important part of Edinburgh’s heritage, so I am delighted to see that it has been returned to the Athletic Arms.”

This is how beer activism works.

Just last week the Ohio state legislature was considering a bill that contained language that would limit the distribution of craft beer so that brewpubs were required to sell through a wholesaler. Crazy, huh?

With a floor vote scheduled in less than 24 hours, Ohio members of the Support Your Local Brewery network were alerted and generated dozens of grassroots contacts to legislators’ offices. By April 20th, the offending provision had been pulled from the bill. Your efforts, coupled with the outreach carried on by many Ohio small brewers, turned this threat back, one which would have almost certainly hamstrung many breweries and potentially closed many brewpubs.

KevBrews reported on this as it was happening.

Visit Support Your Local Brewery to become an Activist.

Pizza and beer, a natural, yes?

But pizza beer? For the next few weeks, Walter Payton’s Roundhouse will be offering pizza beer on its menu — flavored with tomato, basil, oregano and garlic.

Homebrewer Tom Seefurth of St. Charles earned the right to have his beer made at the suburban Chicago brewery based on its success in homebrew competitions. Walter Payton’s brewmaster Mike Rybinski annually scales up a prize-winning homebrew batch to serve at the restaurant.

“Most people have pizza and beer; now you can have pizza in beer,” Rybinski said. “It’ll go great with pastas and all sorts of stuff.”

“The French are always famous for pairing their wine with food, and I wanted to create a beer that’s good with food,” Seefurth said. “And what’s America’s favorite food? Pizza.” 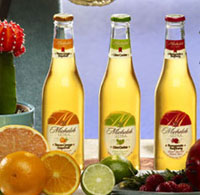 Anheuser-Busch has rolled out three fruit-flavored versions of its Michelob Ultra brand.

The three flavors – Pomegranate Raspberry, Lime Cactus and Tuscan Orange Grapefruit – will be available through Labor Day. They are sold in 12-bottle packs featuring all three varieties, and in single-flavor six-packs.

– A-B has also brewed an all-malt Bohemian pilsner for the Florida market – an extension of its program to brew regional beers in its regional breweries. Tarpon Spoon is brewed with two-row malt and a touch of toasted malt. It is spiced using Saaz and Tettnanger hops.

U.S. mathematicians have come up with a formula that predicts how the head on a beer will change after pouring. Details of their work appears in the journal Nature.

The research could have applications in metallurgy, as the BBC explains, but any brewer will tell you there many contributors to pouring and retaining a good head.

Here are the basics from the math guys:

Writing in Nature, Robert MacPherson, from the Institute for Advanced Study in Princeton, New Jersey, and David Srolovitz, from Yeshiva University in New York, describe an equation that works in three dimensions, as well as four, five and six dimensions.

“Eventually, the big bubbles pop – although they pop for slightly different reasons. On Earth, there’s gravity and the liquid that’s within the walls tends to drain out back into the beer. The walls get thinner and thinner and eventually they pop.”

Results were disappointing because beer shipments in the U.S. grew half a percentage point, and would have fallen 0.7 % by volume if not for the infusion of new brands such as Stella Artois and Bass Pale Ale. A-B started importing those beers and 17 other European brews from Belgian brewer InBev on Feb. 1.

[Via the St. Louis Post-Dispatch]

The Coloradoan in Fort Collins reports New Belgium Brewing Co. has 7% turnover per year, astonishingly low compared to the regional average of 23%.

The reasons go beyond the cruiser bike workers get after one year at the company and the trip to Belgium after five years, said Bryan Simpson, media relations director.

Are happy employees one of the reasons New Belgium’s beers are so popular? Read the story to help decide.

The BJ’s Restaurant & Brewhouse chain has opened its first Florida location in Orlando, with another to follow soon.

BJ’s brews its own beer in a limited number of its locations, which also make beer for others in the chain.

Beer for Orlando and the restaurants that will open in Tampa are made at Saint Arnold Brewing in Houston.

Russell reports it may not be. State officials say the beer shipments place consumers in the position of unknowingly violating state liquor laws, exposing them to fines and prison sentences.

“It’s clearly illegal,” said Maj. John Lutz, director of the state police Bureau of Liquor Control Enforcement, who added that he was unaware of the sales.

The Brewers Association honored a brewing pioneer Thursday during the opening session of the Craft Brewers Conference in Austin, Texas.

The BA presented its Recognition Award to Jack McAuliffe, founder of New Albion Brewing Co. Don Barkley of Mendocino Brewing, who worked for McAuliffe at New Albion, received the award on McAuliffe’s behalf.

McAuliffe opened New Albion – the first microbrewery built from scratch – in 1977. It operated until 1982.

Keynote speaker Vinnie Cilurzo of Russian River Brewing also paid tribute to McAuliffe. He pointed out that he has a sign from New Albion hanging above the window at his brewpub that looks into a room where a variety of beers are aging in wine barrels, and talked about innovation that has been a cornerstone of American brewing for the last 30 years.

“Over the next few days here at the Craft Brewers Conference, I’d like you to think about innovation,” he said. “But think about it from a different angle. Let’s not forget the pioneers in our industry who were innovative for just having the guts to get their breweries open in a time when there was no access to market, no equipment suppliers, and there were few, if any, malt and hop suppliers who were willing to deal with a small brewer.”

The BA presented the Russell Schehrer Award for Innovation in Brewing to Matt Brynildson of Firestone Walker Brewing Co. Brynildson received this year’s award for demonstrating creativity, excellence in brewing and substantial contributions to the craft brewing community.

Looking at the list of previous Schehrer Award winners, Brynildson called those brewers “my true heroes.”

He concluded a short acceptance speech by saying, “Brew true to your heart. Brew with your heart and soul.”

The Brewers Association presented the F.X. Matt Defense of the Industry award to George Hancock, chair of Pyramid Brewing Co. and past president of the Washington Brewers Guild. Hancock helped establish the Washington Beer Commission and heads the commission.

“I accept on behalf of the small brewers of Washington,” Hancock said upon receiving the award.

The European Commission also ordered Grolsch to pay $42.9 million and Bavaria $31 million for a cartel it said they ran from at least 1996 to 1999 to coordinate Dutch beer price increases.

InBev was exempted from any fine because it blew the whistle on several European beer cartels after regulators caught it price-fixing in Belgium.

EU Competition Commissioner Neelie Kroes said the high fines were a warning to any company currently involved in an illegal cartel that increases prices for customers.

“If you do take part in cartels, you will face very substantial fines, so don’t be tempted to start is my advice,” she said. “If you are already in a cartel, then blow the whistle to the Commission to gain immunity before someone else blows the whistle on you.”

Common sense has prevailed and minors will be allowed into the Oregon Brewers Festival, as they have the previous 19 years.

The Oregon Liquor Control Commission previously indicated they would not be. After receiving a new OBF compliance plan, the commission granted permission for minors/parents to attend the event. The festival runs July 26-29 at Tom McCall Waterfront Park in Portland.

“After thoroughly reviewing the Oregon Brewers Festival’s amended proposal, we believe it meets our licensing and enforcement concerns regarding minor patronage at the 2007 festival,” Rudy Williams, OLCC deputy director, said in a press release. “We appreciate the OBF’s willingness to work with the OLCC to help satisfy the public safety interests of Oregonians.”

“We are thrilled that the OLCC has made this decision,” said Art Larrance, founder of the OBF. “The festival has a long-standing history of being a family-friendly event. We promote responsible drinking, and as a result, we have responsible attendees who come together to celebrate our local culture.”

Minors will only be allowed at the OBF with a parent; guardians are not acceptable.

Haymaker features a blend of four malts and three varieties of hops and is 5.3% abv. “We were looking to expand our seasonal lineup, and an extra pale ale was the ideal choice,” said brewmaster Karl Ockert. “We couldn’t be more pleased with the resulting color and flavor profile of the beer.”

Like the other two products in the BridgePort seasonal series, Haymaker’s packaging is a divergence from the BridgePort brand family. The beer’s label and six-pack carrier focus on a whimsical red rooster with a fiery crown standing upon a weathervane, set against the backdrop of a round sun bursting forth with rays of light. The rooster is tossing back an outline of a pint, which is filled with the golden sunlight.

LTD 02 registers “Pale” on the “Malt-O-Meter” that is featured on the six packs. The bottom of the six-pack that features an easy to read chart of “Today’s Recipe,” including hop (Czech Saaz, Styrian Goldings) and malt varieties (2 row pale, caramel, Vienna and wheat), plato (16 degrees), IBU (34), and alcohol by volume (6.4).

After more than a decade operating in a former matzoh factory dating back to the 1870s, the Brooklyn Brewery is looking to move to a facility twice its size at Brooklyn’s Pier 7 on the East River that would cost $20 million. It would be part of a larger redevelopment plan being pushed in the borough by the Bloomberg administration.

The New York Daily News has the details in an interview with brewery co-founder Steve Hindy.