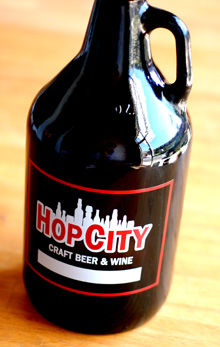 Hop City sells the growlers for $4.99 and fills starting at $6.99. It sold 465 growlers in three days, with 503 fills (and refills) ranging up to $48.99 per growler. Hop City offers 16 beers on tap, and the lineup last week included Wild Heaven Invocation, a single-hop version of Victory Prima Pils and a Red Brick Whiskey-aged 16th Anniversary Brown Ale.

WorldBlu has recognized New Belgium Brewing for its workplace practices by including it on the fifth annual “WorldBlu list of Most Democratic Workplaces 2011”. New Belgium has made the list every year it has applied since 2008. Fifty-two organizations from around the world are recognized on the list created by WorldBlu, a company that specializes in organizational democracy.

The standards to get on the list required a large number of New Belgium employees to complete a survey evaluating how the brewery practices ten democratic principles such as transparency, dialogue and listening, integrity and accountability. Some major factors in New Belgium receiving the distinction were its open-book management practices, employee-ownership and high involvement culture. Not all organizations that apply receive certification.

“Businesses that are open to organizational democracy are usually nimble, resourceful and actively maximizing their human potential,” New Belgium CEO Kim Jordan said for a press release. “When people feel knowledgeable about the process and that their views are respected and heard, then you have created a community where good ideas and talent can flourish without restraint.”

“American Craft Beer Week is all about recognizing and celebrating craft brewers and craft beer culture,” Doug Odell, founder of Odell Brewing Company, said for a press release. “This collaboration lets us do that and have fun making something special for the craft beer drinkers in our hometown community.”

Brewers from each local brewery worked together to create the beer recipe and will participate in two simultaneous brews at Coopersmith’s and Equinox. The finished blend will be poured at each brewery during American Craft Beer Week May 16-22.

The Illinois Craft Brewers Guild (ICBG) stands in opposition to an amendment to Senate Bill 754 that hurts the state’s small brewers.

They’ve asked Illinois residents for their help. Here’s their message:

1. Call your State Senator (look up who represents you here)
2. Ask them to oppose Senate Bill 754 as amended
3. Tell them you want more, not fewer, beer choices and fair laws for craft brewers in Illinois

Pierre Celis, the man credited with reviving the white beer style in Belgium and later fueling interest in Belgian “style” beers in the United States, has died in his home country at the age of 86.

Celis founded the Celis Brewery in Austin, Texas, in 1992 after selling the Hoegaarden Brewery to a larger brewing company that later became part of what is now Anhueser-Busch InBev. His Texas beers, starting with the signature Celis White, were an immediate success, as he introduced American drinkers to “Belgian flavors.”

In 1995 he sold a stake in the Celis Brewery to Miller Brewing, and his family sold the rest of the interest in 2000. Shortly thereafter Miller closed the brewery, selling the equipment and brand to Michigan Brewing. Michigan Brewing continues to make Celis White and other Celis brands, while Van Steenberge in Belgium has brewed Celis White for sale for distribution in dozens of other countries.

Celis returned to Belgium after selling the Texas brewery and remained involved in brewing. His projects included a cave-aged beer, called Grottenbier, made under contract at various Belgian breweries.

Celis was 40 years old and delivered milk for a living when he decided to found Brouwerij Celis in the town of Hoegaarden in 1966. The town once supported 38 breweries, but by the 1930s had only four and none after the Tomsin Brewery closed in 1957. According to Celis, eight years later while listening to others lament the loss of the brewery and the white beer style the region was once known for he started thinking about opening a brewery. His brewing resume included only a little time he spent helping Tomsin when he was younger.

Celis brewed his first batch of Oud Hoegaards Bier in 1966, and five years later was producing a modest 1,500 hectoliers (about 1,200 American 31-gallon barrels). His brewery continued to grow, notably after he changed the name to De Kluis — meaning “The Cloister,” and creating a valuable monastic connection in the mind of consumers — in 1978. By 1985 his brewery sold 75,000 hectoliters annually and employed thirty-eight workers. Although he brewed a variety of beers, the white was the most famous and soon imitated by breweries across Belgium and the Netherlands. Even Heineken followed suit with Wieckse Wit.

A fire gutted De Kluis in 1985, which was disastrous for Celis because he carried little insurance. He sold a majority stake in the company to brewing giant Artois to finance reconstruction, then expansion and growth resumed at an even quicker rate. By the time he retired in 1990, selling his remaining 40% to Artois, the brewery now called Hoegaarden produced 300,000 hectoliters (more than a quarter-million barrels) a year and was about to grow far bigger. Today brewing giant Anheuser-Busch InBev owns the brewery and production exceeds a million hectoliters annually.

Pilsner Urquell is sponsoring a contest for U.S. homebrewers to “take their shot at brewing a Czech-style pilsner,” with a chance to win a trip to Plzen in the Czech Republic.

The contest will be limited to the first 50 homebrewers who reserve a spot to compete in each of three cities in August.

From the press release: “Pilsner Urquell is inviting home brewers throughout the U.S. to take their shot at brewing a Czech-style pilsner, aiming for the standard Groll first brewed nearly 170 years ago. Three winners have the chance to earn trips for two to Plzen, Czech Republic this fall to tour the historic brewery, as well as attend the International Master Bartender Competition in Prague.”

* The Pilsner Urquell Master Home Brewer competitions will take place in New York, Washington, D.C. and Chicago this August, inviting home brewers from across the country to take on this challenging beer style.

* Each competition will feature a panel of experienced judges, including Vaclav Berka, the Pilsner Urquell Brew Master in Plzen. Contestants will need to bring along three 10 to 14-ounce bottles of their home brew. The judges will sample each beer and select winners based on the following criteria:

“Home brewing is becoming more and more popular, and these brewers keep getting more talented, so we’re excited to offer this challenging opportunity,” said Berka, who is only the sixth Pilsner Urquell brewmaster since 1842. “The competitors will need to brew carefully, but the potential prize, including their wonderful batch of beer, should be a strong incentive.”

The competition in New York will be held Aug. 8, the one in Washington on Aug. 10 and the final in Chicago on Aug. 12.

Boston Beer Co. announced it will expand its “Samuel Adams Brewing the American Dream” program to include craft brewers.

“Our goal with this element of Brewing the American Dream is to support small business owners in our niche of craft brewing who are also facing hurdles around starting or expanding their nano or microbrewery,” Boston Beer founder Jim Koch said.

Additionally, Samuel Adams will offer one select brewer the chance to receive a year-long “Brewing & Business Experienceship.” Designed to focus on different aspects of the beer business, the “Experienceship” will provide the brewer extended coaching tailored around his or her specific areas of interest from Samuel Adams employees.

Details on how to apply at are the company website.

Launched in June 2008 in partnership with ACCION USA, the “Brewing the American Dream” program has already loaned $540,000 to 60 businesses – largely in New England – with the goal of reaching $1,000,000 by the end of 2011. Food, beverage and hospitality small business owners can apply for loans to be used for a variety of business purposes including expansion, equipment, and marketing, with all loan payments recycled back into the fund.

The Brewers Association reports that exports of American craft beers increased 28% in 2010.

Canada, Sweden and the UK represent the largest markets for American craft beer.

“The 28 percent increase in the export of U.S. craft beers reflects the increasing consumer thirst across the globe for the world class beers that U.S. craft breweries are creating,” said Brett Joyce, CEO of Rogue Ales and EDP steering committee chair.

* Informing member breweries about opportunities for their products in key international target markets.
Complementing the industry’s own efforts to increase international distribution.

Beers from the 2011 Samuel Adams LongShot American Homebrew Contest – Category 23 have are now available in six packs that includes two of each beer.

In the 2011 American Homebrew Contest, Samuel Adams is accepting entries across all 23 categories. The deadline to enter is May 20.

“I started homebrewing the first batch of Samuel Adams Boston Lager in my kitchen 27 years ago, and ever since then I’ve been passionate about creating unique and interesting brews that challenge the perception of what beer can be,” Samuel Adams founder Jim Koch said for a press release. “We asked homebrewers to really push beer’s boundaries and brew their own one-of-a-kind recipes.”

Information about entering is available at the Samuel Adams website.