Once in a very rare while a press release shows up that simply must be run in it’s entirety. Witness:

Brewing up a pumpkin collaboration beer should be a piece of cake for Dick Cantwell, the pumpkin king at Elysian Brewing and a slam dunk for Shaun O’Sullivan, the 21st Amendment Brewery brewmaster who brought the world Hell or High Watermelon Wheat Beer. In truth, brewing up He Said wasn’t that hard. What proved to be more difficult was getting their story about its inception straight.

Here, straight from the mouths of the pumpkin king and one of the watermelon guys, is exactly what He Said:

Shaun: “I met Dick in 2010. He walked into our San Francisco pub, came over to Nico and me and said he’d always wanted to meet the watermelon guys.”

Dick: “I met Shaun in 1999. He walked into my Seattle pub, came over to me and said he’d always wanted to meet the pumpkin king.”

Shaun: “Later on, while I was knocking his block off at Rock’em Sock’em Robots, Dick mentioned his little pumpkin fest and suggested we attend.”

Dick: “Later on, while hatching a plan to colonize a planet entirely devoted to watermelons and pumpkins I invited him to my massive pumpkin fest.”

Shaun: “One year later, Dick asked me again. Then he kicked me in the shins until I said yes.”

Dick: “Ten years later, Shaun asked me if the invitation still stood. I punched him in the ribs and said yes.”

Shaun: “After drinking the pumpkin elixirs, I told Dick we should do a pumpkin collaboration sometime.”

Dick: “After some cajolery, Shaun and Nico begged me to do a pumpkin collaboration as soon as possible. I said we should brew a pumpkin beer like no other. A Baltic Porter with caraway and cinnamon in a light colored can. Courage!”

Shaun: “I said we should brew a pumpkin beer like no other. A Belgian Tripel with spices in a dark colored can. That’s as big time as it gets.”

Try them both. Two 12oz cans of each version of He Said will be packaged together in a pumpkin-colored carrier that features the likenesses of the two brewers, each telling his side of the He Said story.

Shaun O’Sullivan, Brewmaster and Co-Founder of 21st Amendment Brewery, said, “Last year I attended Elysian’s Great Pumpkin Beer Fest – and this is the truth as it happened – I lobbied Nico hard for us to brew a pumpkin ale and release it in a can.”

Nico Freccia, Co-Founder of 21st Amendment Brewery, said, “I agreed to the endeavor, but only if we could collaborate with the pumpkin king, himself: Dick Cantwell of Elysian.”

Dick Cantwell, Founder of Elysian Brewing and the Elysian Great Pumpkin Beer Fest, said, “Well, it went something like that. In the end, we decided that it would be fun to brew two unusual types of pumpkin beers – a dark and a light – and package them together. And that’s how it happened.”

He Said, part of 21st Amendment Brewery’s Insurrection Series of once-in-awhile four packs, will be available in four-packs and on draft starting in late September.

The economic impact of the 2013 Oregon Brewers Festival (OBF) was $31.2 million, according to a study conducted by an Eastern Oregon University class.

Jeff Dense, professor of political science at Eastern Oregon University, and his POLS 316 Politics and Beer class, administered 748 on-site interviews at the event in downtown Portland between July 24 and 27.

Findings of the study include:

This was the third year of the study.

CraftBeer.com — the Brewers Association website for beer lovers — has announced the winners in voting for “Great American Beer Bar.” Readers selected their favorite bars in each of five U.S. geographical regions as well as picking overall winners. 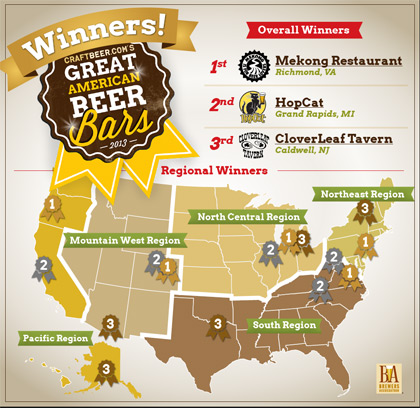 This is how the winners were chosen: CraftBeer.com asked readers to nominate their favorite craft beer bars in the country, and received over 5,000 nominations. Site visitors than coast their votes (more than 37,000) for the 10 most nominated bars in each of the five regions.