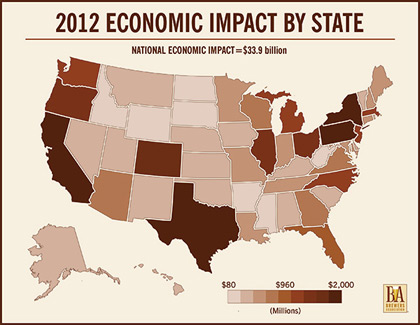 The Brewers Association announced that by its calculation craft brewers contributed $33.9 billion to the U.S. economy in 2012.

The figure is derived from the total impact of beer brewed by craft brewers as it moves through the three-tier system (breweries, wholesalers and retailers), as well as all non-beer products that brewpub restaurants sell.

“With a strong presence across the 50 states and the District of Columbia, craft breweries are a vibrant and flourishing economic force at the local, state and national level,” BA staff economist Bart Watson said. The BA is a non-profit organization that most of the 2,000-plus craft breweries in the country belong to.

In addition to the national impact, the BA examined output of the craft brewing industry by state, as well as the state economic contribution per capita for adults over 21.

For some or all of 2012, 2,347 craft breweries operated in the U.S., comprised of 1,132 brewpubs, 1,118 microbreweries and 97 regional craft breweries. During this timeframe, craft brewers sold an estimated 13,235,917 barrels of beer, with a retail dollar value estimated at $11.9 billion* The industry also provided more than 360,000 jobs, with 108,440 jobs directly at breweries and brewpubs, including serving staff at brewpubs.

Brew Hub, the largest of recently opened operations that will brew beer for other companies, has announced the first clients that will have beer made in its Florida brewery. They are Cigar City Brewing; Orange Blossom Pilsner; and BJ’s Restaurants.

Brew Hub will brew a variety of beer brands for each company at its Lakeland facility and distribute the beer throughout Florida and eventually other southeastern states. First beers are expected to be shipped in May.

The company refers to this as “partner brewing” — a process that allows craft brewers not only to brew their beer to exact specifications under the supervision of their own brewmaster, but also to package and distribute from the Brew Hub brewery and make their beer available for export to international markets. Brew Hub also offers services including sales, marketing, logistics, compliance and government affairs.

“These guys know what they are doing, and I am excited for the opportunity to be able to grow Cigar City Brewing without sacrificing quality or compromising the brewing process,” Joey Redner, Cigar City Brewing founder and CEO, said for a press release. “When you combine Brew Hub’s experience with a new state-of-the-art craft brewery in our home state of Florida, we knew this partnership could help us get more Cigar City beer into the hands of people who love it.”

“The partnerships we’ve formed with Cigar City, Orange Blossom Pilsner and BJ’s Restaurants are exactly why we formed our company,” said Tim Schoen, founder and CEO of Brew Hub.

Brew Hub will brew approximately 40,000 barrels of beer in 2014 for the three partners combined. The Lakeland brewery will have an annual capacity of 75,000 barrels (one million cases). Brew Hub plans to open four additional breweries over the next five years.