A Short History of Manhattan’s Forgotten First Wave of Brewpubs
“I’ve lived in lower Manhattan my entire adult life,” says Torch & Crown co-founder John Dantzler. “But there wasn’t anyone making the beer here that I wanted to drink. It’s a major discrepancy that we’re in the most densely populated part of the country and there isn’t a brewery built to serve the community.” That wasn’t always the case, however, by any stretch of the imagination. In fact, Manhattan used to be a hotbed for brewing operations. Especially in the ‘80s and ‘90s.
What happened?
Read More Via VinePair 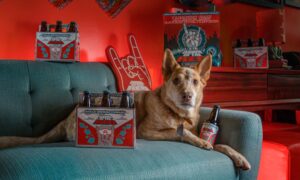 An Ohio Brewery Owner Is Back on an All-Beer Diet—and Raising Money for Charity
For his third annual Lent beer fast, Del Hall is accepting “virtual tips” for local hospitality workers.
Read more via Food & Wine

URGENT RECALL OF BEERS ISSUED OVER FEARS OF EXPLODING CANS
Beer drinkers are being warned to check their cans after an urgent recall was issued for one product over fears of ‘exploding’ cans and higher alcohol content than stated due to secondary fermentation.
Cans of Bright Brewery’s Pineapple Dream Nitro Milkshake Ale will be taken off shelves at independent supermarkets across Australia due to concerns that the beer cans may rupture after it was warned that “secondary fermentation” may lead to a higher alcohol content than is stated on the packaging.
Get the rest of the story Via The Drinks Business