Young people turning away from alcohol is generally welcomed as a positive trend. But it’s bad news both for booze companies, and governments that are watching lucrative alcohol tax revenues dry up along with the populace.
Japan’s National Tax Agency is clearly concerned: It’s taking an unorthodox approach to try to get young Japanese adults to drink more, in an online contest dubbed Sake Viva!
The project asks young people to submit business plans to lure a new generation into going on the sauce, saying Japan’s sake, beer and liquor makers are facing challenges that the pandemic has made even worse.
Contest runs against Japan’s non-drinking trend
Japan’s alcohol consumption has been in a downward arc since the 1990s, according to the country’s health ministry. In the past decade, the government adopted a sweeping plan to counter societal and health problems linked to alcohol, with a focus on reaching the relatively small portion of the population who were found to account for nearly 70% of Japan’s total alcohol consumption.
Read More at NPR

CNN – Watch the video: https://www.cnn.com/videos/travel/2022/08/08/raleigh-beer-garden-north-carolina-world-record-orig.cnn/video/playlists/atv-trending-videos/
Where you can drink some of the rarest beers in the world
The Raleigh Beer Garden in North Carolina holds the world record for most beers on tap and can serve you beers you can’t find anywhere else in the country.
Source: CNN

Absolutely diabolical! Would you ever be able to stop drinking it? 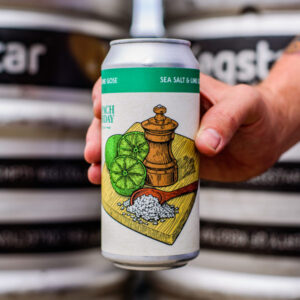 Press release: Anspach & Hobday launches salt-flavored beer
We’re delighted to have partnered with South London based brewery, Anspach & Hobday for a unique collaboration in celebration of our 140th birthday.
The team at A&H, led by co-founders Jack Hobday and Paul Anspach, have been creating new wave, craft beer since 2013. Alongside their classic core range, they create pleasing experimental beers and bespoke collaborations, pouring quality into everything they do. This month sees the launch of their Sea Salt & Lime Gose brewed with Maldon Salt.
Read all about it here