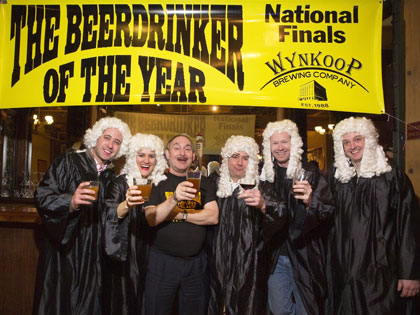 Warren Monteiro, a New York City freelance writer, beer traveler, homebrewer and beer columnist, was chosen as the 2013 Beerdrinker of the Year at Wynkoop Brewing Company in Denver.

“This year was very difficult to judge,” said Cody Christman, the 2009 Beerdrinker of the Year and a judge at Saturday’s finals. “All three finalists were superb and deserved to be on the national beer stage. But Warren won the competition with his blend of wit, knowledge, and a deep passion for all things related to beer.”

Kevin Cox of Muncie, Ind., and Jen Schwertman, a New York City bartender, were the other finalists.

Monteiro has sampled beers throughout the United States, Europe, Central American, India, Sri Lanka and other nations. In 2012 he visited breweries and beer festivals in England, Belgium, the Netherlands and the US. He samples an average of 350 beers each year.

For seven years, Monteiro has written his “Beer Sensei” column for the popular Ale Street News. His home beer bar is the Blind Tiger Ale House in New York City.

In his 2013 Beerdrinker of the Year resume, he detailed his philosophy of beer drinking: “It’s not a habit, it’s a lifestyle. This is why I constantly travel – to get a taste of a new brew or one I’ve been missing, and to find a way to share it whenever possible. I consider creative beer drinking to be an essential part of the tapestry of art and fellowship contributing to a full life.”

For winning the 2013 title, Monteiro wins free beer for life at Wynkoop Brewing, a $250 bar tab at the Blind Tiger, and clothing proclaiming him the 2013 Beerdrinker of the Year.

Anchor Brewing will occupy what is now Pier 48 with production and distribution facilities (artist rendering), a restaurant, museum and other public attractions. The 212,000-square-foot space in the Giants’ Mission Rock development will not replace Anchor’s existing plant on Potrero Hill, but add capacity. The company’s capacity would nearly quadruple from 180,000 to 680,000 barrels a year.

“This is big news for us. We can now further expand our domestic market (Anchor is sold in every state) and open up new international markets,” CEO Keith Greggor told the San Francisco Chronicle. “It’s also a huge commitment to San Francisco.”

The planned development still must get approval from a variety of agencies. If everything proceeds on schedule, construction could begin in late 2014 and brewing in 2016.

The bi-annual competition attracted more than 1,000 entries from 45 countries. Forty judges, all professional brewers, assessed the beers over the course of three days. The medals winners in each category were announced at the National Brewery Center in Burton upon Trent, where the judging was held. The 11 overall championship winners will be unveiled April 24 in an awards luncheon at London Guildhall.

Beers are judged in several categories and sub-categories, so may be classified on how they are packaged, their color, their alcohol content, and by other means.

The complete list of the winners can be downloaded as a pdf.

The Brewers Association reports that H.R. 494, the Small Brewer Reinvestment and Expanding Workforce Act (Small BREW Act) has been reintroduced in the House of Representatives. The bipartisan legislation, which was reintroduced by Representatives Jim Gerlach (R-Pa.) and Richard E. Neal (D-Mass.), seeks to recalibrate the federal beer excise tax that small brewers pay on every barrel of beer they produce.

Under current federal law, brewers making less than 2 million barrels annually pay $7 per barrel on the first 60,000 barrels they brew, and $18 per barrel on every barrel thereafter. The Small BREW Act would create a new rate structure that reflects the evolution of the craft brewing industry. The rate for the smallest brewers and brewpubs would be $3.50 on the first 60,000 barrels. For production between 60,001 and 2 million barrels the rate would be $16.00 per barrel. Any brewer that exceeds 2 million barrels (about 1 percent of the U.S. beer market) would begin paying the full $18 rate. Breweries with an annual production of 6 million barrels or less would qualify for these tax rates.

“Small brewers are small business owners and this bipartisan legislation would allow them to remain competitive, protect existing jobs and create new employment opportunities in communities throughout Pennsylvania and the country,” said Congressman Jim Gerlach, co-chairman of the House Small Brewers Caucus.

“There are few industries with more size disparity than the American beer business. There are 2,500 small breweries who together account for only six percent of the U.S. beer business,” said Rob Martin, president, Ipswich Ale Brewery and Massachusetts Brewers Guild. “Massachusetts Congressman Richard Neal understands the struggles craft brewers face because of this, and he has championed our effort to help level the playing field a little by supporting an equitable federal excise tax bill. He is keenly aware that craft brewers are looking to grow their small businesses and will create thousands of good jobs across the country if this legislation passes. As president of the Massachusetts Brewers Guild, I know I speak for all small brewers when I applaud Congressman Neal’s effort.”

The BA calculates adjusting the tax rate would provide small brewers with an additional $60 million per year that would be used to support significant long-term investments in tanks and other equipment and create jobs by growing their businesses on a regional or national scale. Congress has not recalibrated the excise tax on small brewers since 1976. At that time, there were about 30 small brewers. Today, there are over 2,000.

“America’s small brewers are part of a vibrant, growing industry, and really are Main Street manufacturers,” added Bob Pease, chief operating officer of the Brewers Association. “The Small BREW Act will help America’s small brewers invest in and grow their businesses—an important part of economic reinvigoration. We look forward to working with the new Congress on the passage of this legislation, which will have a positive impact on agricultural, manufacturing, hospitality and distribution jobs for the future.”

The Brewers Association has presented two United States Congressmen with the organization’s Legislator of the Year Award.

Reps. Jim Gerlach (R-Pa.) and Richard E. Neal (D-Mass.) were recognized for their stewardship of the Small Brewer Reinvestment and Expanding Workforce Act (Small BREW Act). The awards were presented at a ceremony in Washington, D.C., by Bob Pease, chief operating officer of the Brewers Association; Jim Koch, co-founder and chairman of Boston Beer Company; and Bill Covaleski, founder and brewmaster of Victory Brewing Company and president of the Brewers of Pennsylvania.

“The efforts of Congressmen Gerlach and Neal reflect their appreciation for America’s small brewers and the significant economic contributions that these men and women bring to the national economy,” said Pease. “We recognize both of these leaders for their commitment to creating a level playing field for small and independent brewers in their home states and across the country.”

The Small BREW Act, introduced by Gerlach and Neal during the 112th Congress and expected to be reintroduced this month, aims to recalibrate the federal excise tax rate structure to further foster the growth of America’s craft brewing community. Currently, brewers producing less than 2 million barrels of beer per year pay $7 per barrel on the first 60,000 barrels they brew, and $18 per barrel on every barrel thereafter. If the Small BREW Act is adopted, the rate for the smallest brewers and brewpubs would be $3.50 on the first 60,000 barrels. For production between 60,001 and 2 million barrels the rate would be $16.00 per barrel. Any brewer that exceeds 2 million barrels would begin paying the full $18 rate. Breweries with an annual production of 6 million barrels or less would qualify for these tax rates.

“Small brewers provide a significant economic spark, creating tens of thousands of jobs and generating tens of billions of dollars in economic activity each year in Pennsylvania and across America,” said Congressman Gerlach, co-chairman of the House Small Brewers Caucus. “These independent and innovative small business owners often work just as hard at improving their communities as they do perfecting their world-class products. It is a tremendous honor to be recognized by the Brewers Association for my bipartisan work in Congress to help small brewers remain competitive and continue building upon the success of America’s craft-brewing revolution.”

“I am honored that the Brewers Association has chosen me as one of their Legislators of the Year,” said Congressman Neal. “As someone who represents many small brewers in Massachusetts, this award has special meaning for me. Craft breweries are locally owned, generate economic development and create good jobs. They also make distinctive products for passionate consumers. As a supporter of the industry, I have introduced bipartisan legislation that would give small brewers a substantial tax break. My plan would recalibrate the beer excise tax for America’s craft brewers, allowing them to reinvest in their businesses. With the help of Brewers Association, I believe this initiative can be approved by the House of Representatives during this session of Congress.”

The Oregon Brewers Festival has added a fifth day to its celebration and for the first time drinkers will use taste beer from glassware rather than a plastic mug. The festival is scheduled for July 24-28 at Tom McCall Waterfront Park in downtown Portland. Hours are noon to 9 p.m. Wednesday through Saturday and noon to 7 p.m. Sunday.

“The festival continues to grow in popularity every year, especially with tourists,” said festival owner and founder Art Larrance. “Due to space constraints, we can’t expand our footprint, so we decided to instead add a day to accommodate more beer lovers. Portland’s role as the ‘Cradle of Craft Beer’ had led our city to be one of the premier beer tourism destinations in the United States, and the Oregon Brewers Festival continues to support that movement.”

The festival expanded from a three-day to a four-day event in 2005. That turned out to be a huge success, and ever since, festival purists have declared Thursday to be the best day to attend due to shorter lines and a full beer selection. Festival organizers are now hoping Wednesday will become the new Thursday.

Another big change to this year’s event is the introduction of a tasting glass. In an effort to improve the tasting experience for the guest and to be more environmentally responsible, the Oregon Brewers Festival will now sell a tasting glass in lieu of the traditional plastic mug. Admission into the festival grounds is free. In order to consume beer, purchase of a 2013 souvenir 12-ounce tasting glass is required and costs $7. Beer is purchased with wooden tokens, which cost $1 apiece. Patrons pay four tokens for a full glass of beer, or one token for a taste. There are no advance tickets sold to the festival; all purchases are made on-site.

The baby Clydesdale featured in a Budweiser commercial shown during Super Bowl XLVII now has a name: Hope. Anheuser-Busch InBev also announced another foal would be named in honor of St. Louis baseball icon, Stan Musial.

Last week Budweiser asked its Facebook and Twitter followers to send along naming suggestions. More than 60,000 tweets, Facebook comments, calls and direct messages followed. “Hope” was one of the more popular female names.

“We were overwhelmed with the response we got,” said Lori Shambro, brand director for Budweiser.

Other popular names submitted included Landslide (after the Fleetwood Mac song in the commercial), Buddy, Star, Raven, Spirit and Stevie.

“Thirty-six hours before Hope was born, on Jan. 14, we welcomed our first-born Clydesdale of the year, a boy,” John Soto, supervisor of Warm Springs Ranch. “We have a special name for him, too.”

Budweiser has announced that the first male Budweiser Clydesdale born in 2013 will be named after the recently deceased baseball Hall of Famer Stan Musial. Many of the suggestions for the female foal, including “Six,” had a Musial connection.