Boston Beer Co. has brought back the Samuel Adams National Stein Hoisting Competition to celebrate Oktoberfest (or OctoberFest, in the case of the Samuel Adams beer) season. The brewery also will attempt to set a world record for the largest, simultaneous stein host tomorrow (Saturday, Sept. 22).

Participants can raise a record-setting stein at one of our four simultaneous Samuel Adams Oktoberfest Celebrations in Boston, Cincinnati, Denver and Chicago. They can also participate from home, watching the event live from Cincinnati at 8 p.m. (Eastern) on the Samuel Adams Facebook page.

Drinkers also have the opportunity to compete National Stein Hoisting Competitions between now and Oct. 15 in local bars and at festivals. Participants will be timed as they hoist one liter of OctoberFest in an official Samuel Adams beer stein.

The two hoisters who hold up the longest – one male and one female winner – will be crowned the Samuel Adams National Stein Hoisting Champions and will receive a trip for two to the 2013 Oktoberfest celebration in Munich. Oktoberfest began in Munich, Germany more than 200 years ago and has since become the largest public festival in the world.

Consumers can visit the Samuel Adams website for national event listings and full rules and regulations.

Prof. Jeff Dense and his students administered 680 on-site interviews at Tom McCall Waterfront Park between July 26 and July 28. Dense then utilized IMPLAN (IMpact Analysis for PLANning), a data and software package, to estimate the economic impact of the Oregon Brewers Festival on Multnomah County. He determined that the 2012 OBF generated $21.15 Million in direct and $8.87 Million in indirect economic output.

“The Oregon Brewers Festival has a profound impact on the local economy,” said for a press release. “Although the tourism industry is the primary beneficiary of the OBF, a wide range of local industries economically benefit from the country’s largest outdoor beer festival.”

Findings of the study include:

* The $8.9 Million indirect economic impact of the Oregon Brewers Festival affects 91 local industry sectors more than $10,000.
* More than 350 jobs were created as a result of the OBF.
* The 2012 OBF generated a total added value of $11.8 Million.
* Visiting OBF patrons spent an average of $649.
* Accommodations ($9.31 Million) and food and drink ($7.96 Million) accounted for the majority of OBF visitor expenditures.
* The majority of OBF patrons were out-of-town visitors.
* Nearly a third (30.3%) of OBF attendees participated in beer tourism during their visit, visiting area breweries and brewpubs.
* More than half of OBF patrons (52.1%) were attending the festival for the first time.
* Women accounted for a significant percentage (33%) of OBF attendees.
* While 21-29 year old attendees constitute the largest age demographic (30.2%) of OBF patrons, the 50-plus crowd has a significant presence (26%) at the festival. 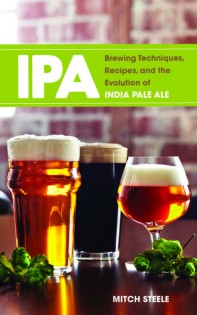 What should “the authoritative guide to the brewing techniques and history behind” India pale ale include?

– A complete and accurate history of the style, one that addresses the various myths. Check.

– Lots of recipes for modern day versions, including many variations, and details about ingredients and process. Check.

– All the data beer and brewing geeks could ask for, packed into handy appendices. Check.

– An author who knows a little about brewing IPAs. Check.

The book is IPA: Brewing Techniques, Recipes and the Evolution of India Pale Ale and the author is Mitch Steele, head brewer at Stone Brewing Company.

A press release from Brewers Publications has more details:

“Arguably one of the leading authorities on hoppy beer, Steele is currently Stone Brewing Co.’s brewmaster, and his brewery experience ranges from the small-scale San Andreas Brewing Co. to the Anheuser-Busch specialty group. In this new book, he explores the evolution of an influential beer style, India pale ale. IPA covers techniques ranging from water treatment to hopping procedures, including 48 recipes ranging from historical brews to recipes for the most popular contemporary IPAs made by craft brewers such as Deschutes Brewery, Dogfish Head Craft Brewery, Firestone Walker Brewing Company, Pizza Port Brewing and Russian River Brewing Company.

“In addition to brewing techniques and recipes, Steele also explores the real history of IPA. Matt Brynildson, of Firestone Walker Brewing Company, explains: ‘Mitch has [written] an engaging and eye-opening history of IPA blended with immensely technical brewing information. He not only debunks the classic story of what the first IPAs really were and how they were made, but also chronicles the tragic account of ale’s rise and fall over the last three centuries. This book should sit on every brewer’s bookshelf.’ ”

More, including details about ordering.