A Japanese brewery makes a beer using milk and calls it Bilk.

Although several American microbreweries have brought back the almost extinct British-style milk stout we’re pretty sure most would consider milk a non-traditional ingredient.

Looking for a way to abuse your liver Friday in Philadelphia?

Jack Curtin has just the day for you, starting with Grey Lodge Pub Groundhog Day Hawaiian Shirt Breakfast, and including events along the way like the latest release of Troegs Nugget Nectar.

Ever watch The Thirsty Traveler – Kevin Brauch – on the Fine Living Network?

Pilsner Urquell has hired him to host a new website called the Beer Advisor.

“Today’s beer aficionados want more than just a beer, they want a total beer experience, and they rely on their trusted bartender to guide them,” said Evan Cohen, U.S. brand manager for Pilsner Urquell. “Beeradvisor.net is a comprehensive resource that arms bartenders, wait staff, restaurant managers and others in the hospitality industry with all the information they need to give their patrons the experience they’re looking for, and then some.”

Although Pilsner Urquell is the sponsor, the Czech beer – SABMiller now owns the brand – does not get particularly preferential treatment.

The presentation has the same feel, some would say sophistication, as the TV series. In his show, Brauch wanders the world in search of all manner of drink, so he might check out vodka in Russian, then beer in Alaska (the latter obviously focusing on the craft beer). In contrast, this site – as Cohen’s statement would indicate – is oriented first toward those who sell beer.

If you visit you’ll quickly conclude that Pilsner Urquell put some bucks behind this project. So – and I ‘ve written about this before – why is it that when you visit a beer website that asks for your age that you have to enter it on every visit? The site may remember all sorts of other things about you, but not your age. It’s not just a nuisance, but trust me on this, when you get older you don’t always want to be reminded of your age.

Michelob is getting a makeover.

Ho-hum, you say? How cares about a new embossed teardrop bottle?

But wait. There’s more news hidden in the Brandweek story.

Michelob will no longer be made with rice and corn. Right, no adjuncts.

Yet the redo is not intended to align Michelob with craft beers, say wholesalers. Rather the strategy is to bring the brand closer to its original roots and target, which is older consumers. Product literature describes the target as 28 to 54-year-old drinkers who might be drawn to a beer with “more robust malty body and distinctive hop character.” A-B was not available for comment.

Drinkers looking for more robust malty bod and distinctive hop character? That wouldn’t be you, would it?

Increases sales are credited to the month-long World Cup football tournament and don’t necessarily indicate the slide of the last decade is over. Sales have declined 15% in the last dozen years. Only in 2004, when weather was unusually warm most of the summer, were brewers able to increase in production.

From the Belgian Shop newsletter:

Alken-Maes, owned by Scottish & Newcastle, announced the closure of its brewery in the town of Jumet, Le Soir newspaper said January 19. It will transfer its production from Jumet to its main site in Alken.

Less than two years ago S&N spent $6.5 million to increase production at Jumet.

“Julia has a passion and a vision for craft beer,” Bob Pease, Brewers Association vice president, said in a press release. “We are excited to utilize Herz’s knowledge of the beer and wine industry coupled with her sales and PR experience to further the ever growing craft beer market.”

Prior to working at Redstone Meadery, Herz served as the sales manager for the Brewers Association (known then as Association of Brewers) for three years.

Lisa Morrison and Mark Campbell put a “beer doo-dah” at the heart of their kitchen/entertainment area when they remodeled their Portland, Oregon, home.

“We live in the most amazing place for craft beer. I really wanted to give craft beer credit where it’s due, so I built this really beautiful thing around beer so that people can walk in and say, ‘Wow, that is absolutely gorgeous.’ This is something you can actually highlight, be proud of and show off,” said Morrison, known in some circles at the “beer goddess.”

The doo-dah is a custom built-in cabinet that delivers beer from two taps and displays the couple’s vast collection of pint glasses. And the floor features a “river of beer” (no, not beer itself, but the wood inlay suggests beer).

The the whole story. Your contractor will thank you.

Just so you know what the biggest brewing companies are thinking.

– Earlier this week we had Miller shelving its Man Laws commercials in favor of emphasizing the taste and heritage of Miller Lite. So you can expect to see more of the spots with Miller workers hanging banners show off Lite’s awards.

– Today the Wall Street Journal (paid subscription required) previews what to expect from Budweiser during the Super Bowl. “In the past couple of years, Bud has largely focused on ads promoting the quality of its brew, leaving the funny spots to its sibling brand, Bud Light, which is targeted at a younger audience,” the Journal reports, explainingg there will likely be a change, with lighter, funnier Bud spots as well.

Wine & Spirits Jobs has an interview with Boston Beer founder Jim Koch. Among the questions: “Is it true that every employee in the company knows how to brew beer?”

“Every year we have a company-wide homebrew contest, and yes, finance, mailroom, sales – everybody has a fair shot at winning. This year, one of our top sales trainers, Ken Smith, won the contest, and we’re going to distribute his beer nationally along with the winners of the American Homebrew Contest under the brand name Longshot. We can provide our people with a great education about beer, but when you have a big pot of boiling, frothing malt overflowing on your stove, you really understand brewing.”

The trial is expected to last three to nine months, and is one of a number of tests Guinness has and is conducting. Currently, Guinness mid-strength with an alcohol content of 2.8 percent is on trial in Irish pubs.

The Latrobe brewery where Rolling Rock beer was made is closer to reopening. During a visit to Latrobe on Tuesday, Gov. Ed Rendell announced state grants and loans totaling more than $4.5 million to help its new owner, City Brewing Co., upgrade the plant to expand its production capacity. City Brewing, which has acquired the brewery, hopes to have it back in action next month.

How do American beers stack up against others in the world?

Sure they do well in the World Beer Cup, but that’s on American soil. What if you put them on a boat first? We’ll find out in April, because the Brewers Association Export Development Program (EDP) announced today that 19 BA members and EDP subscribers will particpate in the Australian International Beer Awards.

Several American breweries have entered the AIBA in the past, and won awards, but not a group like this. In 2006, the Australian International Beer Awards attracted 974 entries from 31 countries. AIBA uses the Brewers Association’s Beer Style Guidelines.

The Brewers Association’s Export Development Program, in an effort to help promote the image of American craft beer as a world class beverage, pays for entry fees and transportation into select international beer shows for its program subscribers, such as the AIBA. 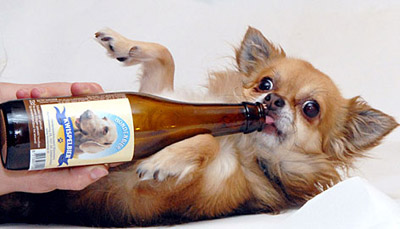 At pet shop owner in the Netherlands has created a beer for dogs.

Called Kwispelbier it sells for comparable to $2.14 a bottle, which is four times what Heineken – the local beer, remember – will cost you.

A Napa Valley business already sells a beer for dogs in the United States.

Stuff to talk about around the water cooler today:

– Deschutes Brewery is about to announce it will operate a pub in Portland.

Faced with an increasingly competitive light beer market, Miller Brewing Company is introducing new television ads that focus on the taste and heritage of its flagship brand. The spots will replace the popular Man Law campaign, which Miller said will continue on-line and may return to the airwaves opportunistically in the future.

The first wave of the new episodic advertising approach broke over the weekend. The “GHT” ads featured a guy preventing people from drinking light beers with “GHT” and instead giving them Miller Lite. The ads position Miller Lite as ‘the light beer that invented light beer’, the original light beer that’s always been brewed to be great.