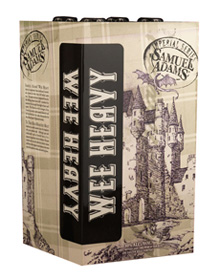 Boston Beer has added a fourth beer to its Imperial Series, Wee Heavy.

“As we did with the original three Imperials Series brews, Double Bock, Imperial White and Imperial Stout, we challenged ourselves to test the limits of a beer style and create a more intense version,” Samuel Adams founder Jim Koch said. “Wee Heavy is not your traditional Scotch ale; we used bigger, bolder ingredients to boost the style’s flavor.”

Other beers in the Imperial Series are Double Bock, Imperial White and Imperial Stout.

Celebrating the end of Prohibition 78 years ago, Santa Margarita Ranch and Firestone Walker Brewing will host a festival April 8 that features bourbons, ports and barrel-aged beers.

Tickets are $50 and the event runs from 7 p.m. to 10 p.m. at the historic ranch 20 miles south of Paso Robles, where Firestone Walker Brewing is located.

The lineup of barrel-aged beers already includes selections from Firestone Walker, Lost Abbey Brewing, Ballast Point Brewing and Stone Brewing — and others likely will be added.

Wineries scheduled to pour ports include Cass, Roxo Cellars and EOS. More likely will be added.

Guests will enjoy tapas from Chef Chris Kobayashi (Artisan), Chef Mark Sahaydek (The Grill at Avila Beach Golf Resort), Chef Justin Gabbert (Novo) and other chefs yet to be named.

For more information or to purchase tickets visit www.fromthebarrel.net or call (805) 540-3508.

The association provided the following information:

The hearing for SB202 to shift the Tap Room Hours is scheduled for Thursday (Feb. 17) in the Senate Business, Labor, and Economic Affairs Committee .

Important points about the bill:
• It does not increase tap room hours. It shifts them from 10 a.m.-8 p.m. to noon-10 p.m.
• It meets the expectations of Montanans and better accommodates the visiting public and tourists’ schedules.
• Brewers will still be limited to serving 48 ounces per person per day and are not asking to increase this limit.
• It aligns with neighboring and regional state laws, which have no hours restrictions.
• It aligns with Montana wineries laws, which have no serving hours restrictions.

The Brewers Association has announced SAVOR: An American Craft Beer & Food Experience has added a second session. It will be held June 3-4 in the National Building Museum in Washington, D.C.

Attendees may sample beers from 72 craft brewers, who team up with a duo of expert chefs to pair each beer with special dishes. Educational salons and private tasting salons will provide additional opportunities for attendees to interact with chefs and brewers.

Details from the press release:

TICKETS
SAVOR tickets go on sale to the general public on Thursday, March 3, at SavorCraftBeer.com. General Admission tickets for Friday, June 3 or Saturday, June 4 are $110 and SAVOR Salons are $30 per Salon.

NEW FOR 2011
Two Expert Chefs Orchestrate Pairings
This year’s menu items and pairings will be carefully designed by expert beer and food pairing chefs from both coasts: Adam Dulye of Monk’s Kettle in San Francisco and Teddy Folkman of Granville Moore’s in Washington, D.C.

Educational Salons and Private Tasting Salons
Nine ticketed Educational Salons, seating 90 people in an auditorium, will feature the culinary and brewing artistry of chefs and craft brewers along with in-depth discussions of flavor and pairings.

Full-Size Stemmed Glassware
For the first time, SAVOR attendees will receive full-size commemorative glassware for sampling at the event and later for personal use. 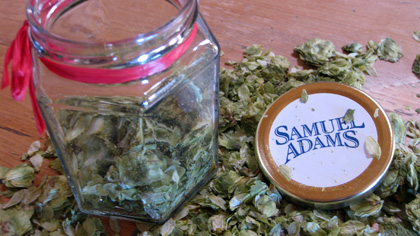 We’ve started a beer countdown to Valentine’s Day on our Twitter feed, but some things just don’t fit into 140 characters.

Turns out that Boston Beer has partnered with FromYouFlowers.com to create a Samuel Adams Hoppy Valentine’s Day basket.

No beer. But, not surprisingly, Samuel Adams founder Jim Koch has a solution. “Couple the basket with a six-pack of Samuel Adams Boston Lager and you have the perfect gift,” he said a press release. The release includes results from a survey that found 70% of women says it’s hard to find the perfect Valentine’s Day gift.

“Men are typically overlooked on Valentine’s Day, so we wanted to come up with a way for them to receive something they actually want and will enjoy,” Koch said for the press release.

The hops, of course, are the flower addition to the package. The are the same noble hops that Koch rather famously travels to Bavaria each year to choose from each year’s crop.

The package costs $54.99 and is available through Monday. Customers who enter the promotional code “SAM” will receive 20% off on their order.

The Horse Brass Pub announced today that it would be closed for regular business on Sunday (Feb. 13) for a wake to honor its owner Don Younger, who died last week.

Younger was one of America’s pioneering publicans, and is credited with helping turn Portland and the state of Oregon into “Beervana.” He operated the Horse Brass from 1976 until his death.

The “Celebration of Don’s Life” will be held from 2-6 p.m. at the Horse Brass. The back parking lot will be tented to allow for more people to attend.

The finalist have been chosen to compete for Wynkoop Brewing Company’s 2011 Beerdrinker of the Year award.

The finals are Feb. 26 at 2 p.m. at Wynkoop Brewing in Denver. The event is open to the public and admission is free. The competitors are:

* James Clark, a Springfield, Va., homebrewer, beer traveler and beer ambassador. In 2010 he visited 17 breweries, attended over a dozen beer festivals and held beer events at his home that welcomed as many as 160 people. His philosophy of beer drinking: “Live life to the brim! I was a late arrival to beer drinking but I caught up quickly. I didn’t have my first beer until I was 31, but it was a German Pilsener in Germany. In the last 16 years I’ve been going full throttle; drinking, brewing, studying and visiting my way to the top of the beer expert’s pyramid.”

* Mike Dixon, a Wake Forest, North Carolina beer lover, certified national beer judge and beer event organizer. Dixon has tasted beers from 44 states and 39 countries and visited over 600 beer establishments. He is a four-time semifinalist, but this will be his first time in the Beerdrinker finals. His beer philosophy: “A well crafted beer is the perfect accompaniment to any meal or event. Life is too short to be wasted on beer without flavor and every glass of beer should be a new adventure. Every day I am working to improve my beer knowledge and beer experience.”

* Phil Farrell, a Cumming, Georgia commercial pilot, homebrewer, grand master beer judge and four-time Beerdrinker finalist. He has tasted beer in every country in Europe, all 50 states, every US territory, as well as 1000s of the world’s pubs, breweries and brewpubs. His philosophy about beer: “Fear no beer. All of my ‘beeroes’ (beer heroes) were fearless. In my short beer lifetime, a wasteland has been turned into a paradise…and I live in the best beer country in the history of the planet. Beer helps connect people. Beer is the greatest gift ever given to the human race and is meant to be shared with others.

The winner receives free beer for life at the Wynkoop Brewing Company, $250 worth of beer at their local brewpub or beer bar, and clothing proclaiming them the 2011 Beerdrinker of the Year.

Molson Coors in the United Kingdom today announced the acquisition of the award-winning Sharp’s Brewery, including Doom Bar — which is describes as “the UK’s most exciting cask beer brand.”

Molson Coors chief executive for the UK and Ireland, Mark Hunter, said: “The Doom Bar brand is modern and progressive. It has a loyal following and excellent reputation amongst consumers and customers alike and has the potential to become a truly extraordinary brand. We have a wealth of experience with this type of venture and an excellent track record of building brands across all markets. We respect and want to preserve the unique culture of Sharp’s Brewery and the special appeal of their brands to beer drinkers.”

Stuart Howe, head Brewer at Sharp’s Brewery, said: “We are delighted to be joining the Molson Coors team, all of whom are passionate about Sharp’s Brewery and committed to the Doom Bar brand. We are incredibly proud to be voted the best regional cask beer by our customers, with the support of Molson Coors we’re looking forward to being recognised as the best cask beer in the country.”