SABMiller plans to buy Royal Grolsch for $1.2 billion, with plans to expand sales of the 392-year-old Dutch beer brand in Latin America and South Africa.

Grolsch accepted a bid – subject to shareholder approval in January – of 48.25 euros a share in cash, London-based SABMiller said. That’s a premium of 79% over its previous closing price.

“The deal is expensive,”‘ said Marcel Hooijmaijers, an analyst at Landsbanki Kepler in Amsterdam. Buying Grolsch is “smart”‘ because SABMiller “completes its premium brand portfolio with a northern European brand,” he said.

“We see significant potential for the brand across Africa and Latin America where the premium sector is still in its infancy,”‘ Malcolm Wyman, SABMiller’s chief financial officer, said on a conference call.

Judging was conducted Monday and awards were handed out Thursday at BRAU Beviale in Germany, a giant trade show primarily for the European beverage industry.

Fifty-four judges from 28 countries judged 575 beers for the Beer Star Awards. The competition, which “assesses beers purely on sensory criteria and enjoyment,” was initiated four years ago.

The Harpoon Brewery in Boston grabbed two golds, besting the Germans on their home turf to win the Märzen category as well as the highly competition India Pale Ale competition (where American breweries were second and third).

An Australian born in Germany has set a world record for carrying beer steins, hauling 20 of them 40 meters.

Reinhard Wurtz, a burly and well known restaurant manager in Sydney, broke the mark of 16 set by Munich barmaid Anita Schwartz. He set the record at the Lowenbrau Keller, the German-style beer hall he manages. He started with 21 steins, each holding one liter and weighing 2.3 kilograms (or pounds) but dropped one weaving through an obstacle course of tables and chairs.

“I don’t think the people of Germany will be offended that the record has gone to Australia,” Wurtz said. “I’m happy for them to try and claim it back.”

Heineken and Carlsberg boost their offer for Scottish & Newcastle.

“The board, having consulted its advisers, has no hesitation in rejecting this wholly inadequate proposal as it substantially undervalues the unique strengths and market position of S&N,” the UK brewer, led by chairman Sir Brian Stewart, said in a statement.

Danish firm Carlsberg and Dutch brewer Heineken plan to carve up S&N if they come up with a successful bid.

No surprise that American brewers aren’t the only ones feeling the pinch of price spikes for hops and malt.

He said the world price of aromatic hops had doubled in the past two years and the price of brewers’ barley had tripled.

– In the U.K., the Society of Independent Brewers warned the price of a pint might increase 10p to 15p (which amounts to 20 to 30 cents). British brewers are looking at increases of nearly 40% for barley compared to last year and 100% for some hop varieties.

“After wages, raw materials represent the biggest single expenditure by small brewers who now face the dilemma of whether to put up their prices and lose trade or absorb the higher costs and take the risk of their businesses becoming economically unsound,” said Peter Amor, SIBA chairman.

Widmer Brothers Brewing and Redhook Ale Brewery will merge, creating a new company to be called the Craft Brewers Alliance.

Logistically it’s a buyout, with Redhook issuing 8 million new shares and paying about $50 million in stock to Widmer Brothers, which is privately held. Anheuser-Busch owns about a third of each company and will continue to own that much of the new corporation. The combined company will continue to be publicly traded on NASDAQ under the symbol HOOK.

“I believe that the merger will allow us even greater opportunity to deliver unique and great-tasting beers for our customers,” Widmer said. “The two companies have a common goal — we both strive to brew the best possible beer for our customers.”

Shipman, 54, will effectively retire when the deal closes, receiving a severance package. He co-founded Redhook with Starbucks co-founder Gordon Bowker in 1981.

“I don’t plan to stop working, but I don’t plan to work in the beer business,” Shipman said. “I haven’t figured out what I’m going to do, but I have a penchant for alcoholic beverages.”

Both companies will keep their existing breweries, including Widmer’s breweries &#151 the company recently completed a major expansion &#151 in Portland and Redhook’s in Woodinville and Portsmouth, N.H. They also plan to continue making their existing beers.

Widmer owns a minority stakes in two other breweries, Kona Brewing in Hawaii and Goose Island Beer in Illinois. 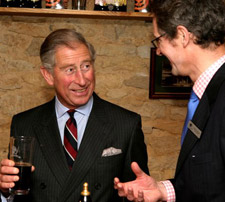 It’s always a good day at the brewery when a prince drops by. Prince Charles recently visited Oxfordshire’s Wychwood Brewery, because that’s where his Duchy Originals Organic Ales are brewed.

“We are all absolutely delighted and honored that The Prince of Wales took so much time from his busy schedule to visit the Wychwood Brewery. It is a huge tribute to everyone who works at Wychwood that The Prince, who was so obviously fascinated in the production process, was able to recognize all the hard work that goes into our beers,” Thompson said.

The 2007 batch of Utopias, checking in at a beer-record 27% abv, lined up against Frapin VIP XO Grand Champagne and Fonseca 1994 Vintage Port from Portugal in an event at David Burke’s Primehouse Restaurant.

The 2007 Utopias is a blend of liquids, some of which have been aged in a variety of woods at the Boston Brewery for up to 13 years. A portion of the beer was aged in hand-selected, single-use bourbon casks from the Buffalo Trace Distillery.

Although brewing giant InBev’s profits increased in the third quarter, its stock took a hit because those were short of expectations – and the company warned that the increasing cost of ingredients will cut into profits next year.

The company reported rising sales in Latin America and Russia while sales in western Europe slumped. Sales were down 11% in Germany, in part because numbers were compared to 2006, when the country hosted the World Cup in Germany. Sales in Belgium decline 9.6%.

Chief Executive Carlos Brito blamed the weaker-than-expected performance primarily on poor sales in the U.K. and China and the rising cost of raw materials that include malt and aluminum.

Although he expressed optimism about the fourth quarter, InBev company warned that increasing commodity prices, especially for barley and malt, will affect all its business units in 2008.

The results included a $3.9 million provision for the possibility the company may owe additional excise taxes. An ongoing audit by the Federal Alcohol and Tobacco Tax and Trade Bureau could push the bill higher.

Third-quarter revenue rose 15.9 percent to $97.2 million, from $83.9 million, as the company sold 476,000 barrels compared with 432,000 barrels a year ago. Profit was hurt by an $8.6 million increase in the costs of goods sold, higher package material and ingredient costs and expenses from the temporary shutdown of its Cincinnati brewery for maintenance.

The company said it has completed due diligence related to its previously announced agreement to buy a brewery outside Allentown, Pa., and expects to begin brewing beer there next summer. It said it also expects to make further unspecified investments in its Sam Adams brewery in Cincinnati over the next three years to ensure a more reliable, efficient operation.

The Associated Press asks if the beer wars are back.

It appears that Anheuser-Busch might have been inclined not to respond to the latest advertisements from Miller Brewing about Miller Lite having more taste than Bud Light, but when Miller insulted A-B’s dog that was too much.

Milwaukee-based Miller’s new ad for Miller Lite, unveiled nationwide during football games and NASCAR events, features a Dalmatian on a wagon led by Clydesdales — the iconic horses synonymous with Anheuser-Busch, maker of top-selling Bud Light. In the distance, a Miller Lite truck appears, proclaiming “Miller Lite. Half the carbs of Bud Light” on the back. At a stop, the dog jumps into the Miller truck and rides away.

St. Louis-based Anheuser-Busch responded with a full-page ad in USA Today on Tuesday, complete with a picture of a Dalmatian, telling Miller to “keep up the bad work.”

“Apparently, Miller Beer believes they have to say negative things about our brands to sell their beer,” the ad said. “At Budweiser, we’re positive there’s a better way of doing things.”

The ad said Anheuser-Busch will make a donation to animal rescue groups across the U.S. in response to Miller’s ad.

New advertisements from Miller come at a time that the company is preparing to merge its U.S. operations with Molson Coors. It has been suggested that A-B, the nation’s largest brewing company, might have a competitive advantage if the second and third largest focus more on merging than competing with A-B.

Miller President and CEO Tom Long said in a note to distributors Tuesday that the company will air the ad this weekend during football games on several networks. It also will be posted on YouTube.

“The ‘able challenger’ is alive and well, and if A-B thought the Miller system would lose its competitive edge in the months to come, they don’t know us — or you — very well,” Long wrote.

If all goes as planned, Miller and Coors will merge their U.S. operations in 2008, but the companies have not yet decided whether the headquarters of the MillerCoors joint venture will be in Milwaukee or in the Denver area.

The Milwaukee Journal Sentinel compares the advantages of each town. Their focus is on things like labor costs, health care costs and taxes.

The report includes quality of life, but there’s no rating for “beeriness.”

Miller Brewing might be pleased enough with the early success of a 64-calorie called MGDL-4 (or Miller Genuine Draft Light) it might extend the test throughout the Midwest and maybe even beyond.

Brandweek reports that MGDL-64, which debuted in August in Madison, Wis., has fared particularly well with women who sampled the low-calorie beer against Coors Light and Michelob Ultra from Anheuser-Busch.

Its tagline “As light as it gets” has appeared on retail displays as well as on out-of-home signage.

Miller rep Julian Green said, “We have made no definitive decisions about MGDL-64 beyond Madison and while we’re encouraged by the early results in Madison we’re waiting for a more detailed assessment which will influence our decision.”

When you are really thirsty, like after a good workout, what refreshes you better, water or beer?

If you think that is a rhetorical question, news that Spanish researchers say beer can help someone who is dehydrated retain liquid better than water shouldn’t be a surprise.

Prof Manuel Garzon, of Granada University, also claimed the bubbles in beer help to quench the thirst and that its carbohydrate content can help to replace lost calories.

Prof Garzon asked a group of students to do strenuous exercise in temperatures of around 40C (104F). Half were given a pint of beer, while the others received the same volume of water.

Prof Garzon, who announced the results at a press conference in Granada beneath a banner declaring “Beer, Sport, Health”, said the hydration effect in those who drank beer was “slightly better.”

Juan Antonio Corbalan, a cardiologist, said beer had the perfect profile for re-hydration after sport. He said he had long recommended barley drinks to professional sportsmen after exercise.

Lew Bryson, writing for Portfolio.com, and Lauren Clark in the Kansas City Star have everything you wanted to know about pumpkin beers but were afraid to ask.

James Ottolini of Schlafly Beer gives Clark his theory why.

“They’re fun. Halloween is one of those holidays that are fun. Adults might have stopped going door-to-door for candy, but we never stopped dressing up. As we grow old, we lose some of the playfulness and magical thinking we had as kids. Halloween gives you a permission slip to be funny and silly.”