Comedian Zane Lamprey (below, right) joins his Danish friend Lars (left) in a “drinking roulette” game as part of The Second Annual Three Sheets New Year’s Eve Pub Crawl from London. An exclusive webcast of this new original special begins on www.mojohd.com at the stroke of midnight, ET on Thursday, January 1 (it will be available on the site throughout January). 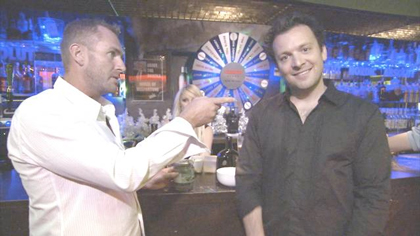 The show celebrates New Year’s Eve by traveling to the geographical heart of time’s measure (Greenwich Mean Time). Zane’s mission is to visit London’s watering holes with international themes plus make a few stops at traditional British establishments. He begins at James Bond creator Ian Fleming’s favorite drinking location (Dukes Hotel) and goes on to England’s “oldest coaching inn,” The George Inn (no one’s sure of when it opened, but it was rebuilt after a fire in 1676). Almost lethal drinks imbibed by Zane and friends include “A Bunny with a Gun,” “Extra Añejo,” a “Chilly Willy,” “Ice the Cake,” a “Leg-Over-Land,” a “Monkey Shoulder” and “Bitter and Twisted Beer.” Ultimately, will Zane survive after meeting “Barry the Poisoner” or a visit from his most celebrated Three Sheets drinking partner Steve McKenna?