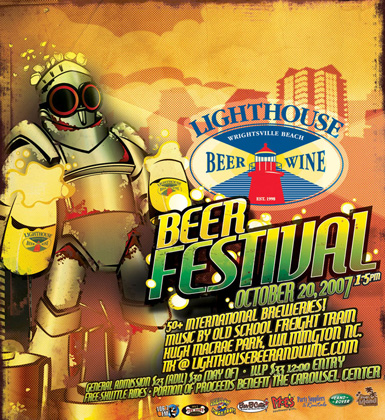 I attended this beer festival after the Great American Beer Festival in October. I apologize to my Carolina homies for letting it slip to the bottom of my to-do pile several times in the last month or so. One of the things that lit a fire under me to get it done was an article I saw in the Wilmington Star News that didn’t seem to have a lot of good things to say about the festival. This fest didn’t go off exactly as planned due to reasons you’ll read further in, but that doesn’t mean it didn’t succeed in its initial goal of showing people a good time and exposing them to some really good beer.

Wilmington, North Carolina is a special place for me. Though I live in Oregon, my heart, and most of my family, stays in Carolina. Wilmington, once the heart of Carolina shipbuilding industry and the last port to fall to the damn Yankee’s in the civil war, has retired from working for a living and become the Hollywood of the East coast film industry and seaside tourism destination.

Wilmingtonian’s, and Tarheels in general, have always been partial to beer. Not craft beer of course, the dreaded fizzy yellow beer. If you were drinking beer it was Bud, Miller, or whatever was on sale at the Piggly Wiggly. If you really wanted to put on the dog, you’d pick up some Lowenbrau or Michelob.

Those days are gone now, I don’t mean there’s not a lot of fizzy yellow beer consumption still going on. Heaven forbid we forget our roots! What I mean is since the successful NC Pop-the-Cap push for repeal of the 6% alcohol-by-volume limit on beer, there has been a craft beer explosion in the state whose motto is “First in Freedom”.

Wilmington has 2 breweries of its own, Front Street and Azalea Coast, the Wolf Beer brand is distributed locally but actually contract brewed in Farmville at the famous Duck Rabbit Brewery. Duck Rabbit makes a damn fine lineup of dark beers. The state boosts around 35 breweries the last time I counted. Whereas my best bet for a decent craft beer during a visit home used to be limited to Lager Heads, Mello Mushroom or the Front Street Brewpub, the beer selection at the local stores and restaurants gets a little better every year. Great bottle shops like Lighthouse Beer & Wine in Wrightsville Beach and Topsail Island lead the way and show the rest how it’s done.

When I walked into Lighthouse Beer & Wine for the first time an old friend met me at the door, a display of everything Oregon’s Rogue Ales makes occupied a hallowed centerpiece display. They even had Brewers Strong Ale with the dog tags! I looked around; a huge selection of the best craft beer has to offer filled the cooler cases. The labels of breweries large and small from coast to coast and around the world lined the shelves, Avery, Bosteels, Dogfish Head, Spaten, Bear Republic, Chimay and the 21st Amendment. I could go on but I think you get the point.

If the store itself was an indicator, this boded to be a most excellent beer festival. Little Ol’ Hugh MacRae Park, a good place to catch turtles and snakes when I was a kid, was the October 18th destination for a day filled with live music and beer from 50 International Breweries.

Any sailor who’s ever sailed the waters off Cape Fear will tell you, the weather changes on a whim here. So it wasn’t a total shock when the gods conspired to ruin the day. The morning of the dawned slate gray, dark clouds gathered and winds rose. My nephew Nathan Greenough, who’d volunteered to help me photograph the event, wondered aloud if anyone would show up as he squinted at the sky through slapping windshield wipers.

“I guess this’ll be a good test of how Die-hard the local beer enthusiasts are, I replied. 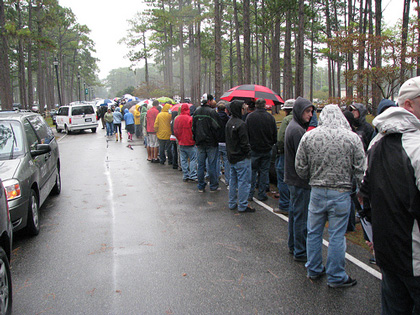 The question was answered as we approached the parking area for the event. The beer festival gate had just opened and the line stretched back for about a quarter mile. Slickers and gum boots was the style for the day and Wilmington’s faithful were here-for-the-beer come rain or shine.

Mix rain with beer and tents and what do you get? Lots of people jammed under tents drinking beer, that’s what you get. Each line was a struggle to get to the tap and then another to make it back out with your sample intact. I don’t blame the event planner, it was an unforeseeable problem and the group seemed to take it in stride. There wasn’t any pushing or heated words exchanged, it was miles of smiles from moist beer enthusiasts shouting happy recommendations to one another as I moved from line to line and tent to tent.
I had hoped to connect with a group of ladies called the Wilmington Beer Girls I met via myspace (ain’t the internet great!) but I didn’t expect the crowd to be so large so finding the ladies, or should I say ‘Girls”, wasn’t possible. Next trip we’ll do a tasting girls! 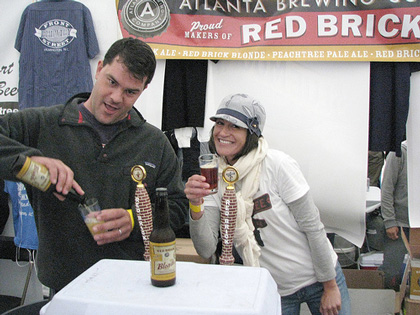 I started out looking for beers I hadn’t tried before. There weren’t many, I had just come from GABF after all, but I found a few. The Atlanta Brewing Company, “Oldest in Georgia” brews Red Brick Beers. They had a nice Brown Ale on tap I added to my repeat list. Big Boss Pumpkin Ale was excellent and I had to sample my other Big Boss favorite Angry Angel Kolsch while I was there. Wolf Beer Company’s White Wolf Golden Ale was pretty good. I was disappointed the Azalea Coast Brewery didn’t have any of their Teach’s Chocolate Stout on tap. (Named for Edward “Blackbeard” Teach, a frequent visitor to the Cape fear area.) I’d been dreaming of getting my hands on some since I’d tried it last year at the Charlotte Oktoberfest. I’d have to actually go out and buy some the next day. (Gasp!)

The selection was pretty good; the South was well represented as were the heavy hitters of American and international craft beer. As the rain dropped to a drizzle the people ventured out from under cover and the crush in the tents eased. Old timey music, the sound of home for me, filled the air as Woodwork Roadshow did there thing. The music warmed my heart and made the beer taste even better. 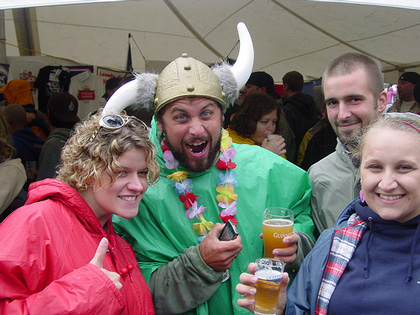 This was a special moment for me. My niece Susannah and her husband Bill, joined Nathan and I. They’d never been to a beer festival before and I was happy I could share there first experience with them. They were having a blast and found several new favorite beers. Sure it was raining, cold, and there were long lines at the port-a-potties, but the music was playing, the beer was good, and so was the company. I’ve been to Raleigh and Charlotte and seen their large craft beer communities turn out for some excellent festivals, but Wilmington is home and now craft beer is part of everything I have to look forward to when I return and come hell or high water (but I really hope it doesn’t come to that next year), I’ll be there for the 8th Annual Lighthouse International Beer Festival in 2009. See you there; I’ll be the one holding a beer and wearing a big smile.

More information about the Lighthouse International Beer Festival can be found at their website.

Pictures from the 7th Annual Lighthouse International Beer Festival can be viewed on Flickr here.