The 21st Annual Oregon Brewer’s Festival week started out for me on Monday with Fred’s 17th annual beer and cheese tasting at Rogue Ales Public House, and though the Brewer’s Dinner on Wednesday kinda gets the juices flowing, it really doesn’t feel FESTY until Thursday’s kickoff parade rattles the windows of downtown Portland. 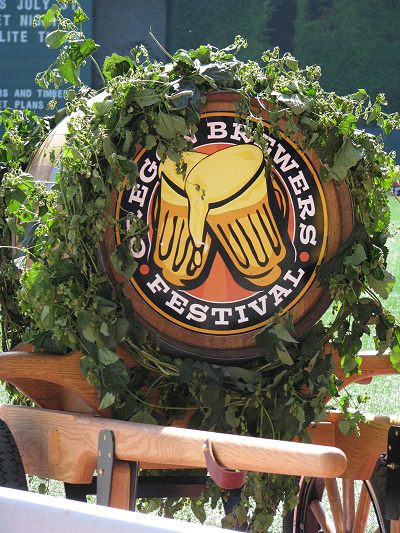 This parade of gregarious guzzlers, sanctimonious sippers, and insolent imbibers began in 2005. It started as a brewers lunch followed by an organized little stroll down to the riverfront to tap the opening keg. Enthusiasts joined in that initial procession and by the time they reached the river the numbers had swelled from a group to a parade. In 2006, due to a serious misalignment of the cosmic continuum, the parade didn’t happen, so the guys at Rogue Ales decided to put their considerable skills in organizing and loud obnoxious behavior to work to make sure 2007 would be a parade to remember. It was a well documented success and this third opening parade was Widmer’s turn to shine.

You might remember last year the parade started at Rogue Ales Public house and I got a month’s worth of exercise photographing, running, photographing, running…you get the picture…all the way down to the opening ceremonies at the waterfront. This year my wife, Bonne, joined me at the festival, adding her considerable photographic talent, and innate ability to run very quickly for short distances, to the event coverage.

As I mentioned, the host for the brunch and the parade leader for 2008 was Widmer Brothers Brewing Company. Bonne and I planned to attend the brunch at PGE Park, then photograph the parade all the way to the waterfront. We were taking pictures at the entrance when Rogue Ales Boss, Brett Joyce of and his gang of Rogue Monks approached, “Hi Banjo! Are you going to cover the parade?”

“Yes, Bonne and I plan to take pictures along the route…”

“You should take pictures from inside the parade!”

“Here! Wear this!” he said and someone tossed me a bag.”

This is how I came to embrace my inner Monk and ended up documenting the parade from the inside…inside a Rogue Monk’s frock that is. 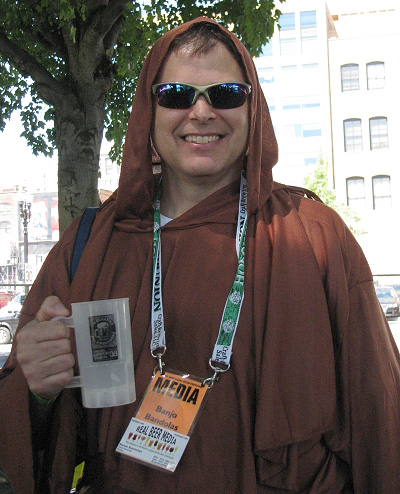 As a writer, I enjoy a certain amount of anonymity as I stand off to the side, scribbling observations in my notebook, and snapping pictures here and there. Donning the Rogue robes opened the door to another kind of anonymity, the kind you experience when you lose yourself in a character. Though still recognizable as Banjo, mild mannered beer correspondent for Realbeer.com, a few yards of cheap brown polyester transformed me into Rogue Monk, “watch out folks, even I don’t know what I might do.”

All 300 brunch tickets had sold out weeks before the event so there was a pretty good crowd waiting as our brown mass of monks took the field, many approached us to have pictures taken. It was a blast, and the parade hadn’t even begun yet. There were other costumed crusaders in the crowd, Widmer’s lemon wedge and glass of Hefeweizen scurried back and forth and the rest of their crew had on wrestling masks and capes, think Mexican pro wrestling. This is the team that would lead the procession, followed by the Monks. Their look actually meshed very well with ours. It was sort of like a promotional event for the Jack Black movie Nacho Libre and I was waiting for them to start yelling his signature war cry of “Nachoooooooooooooooooo!” 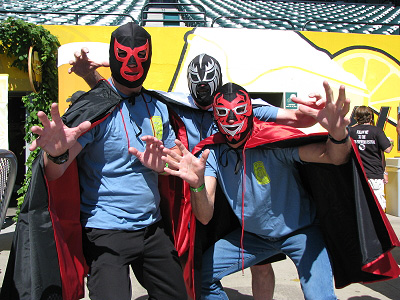 The breakfast was your typical egg, bacon, and sausage affair with plenty of Widmer Hefeweizen and Broken Halo IPA on tap. I’d barely finished when the drummers began to play and Art Larrance started yelling instructions. We formed up to start the procession and followed Art, the Widmer Brothers, and the Mayor of Beertown, Tom Potter, out of the stadium and onto the streets of Portland where the rest of the marchers joined the party. 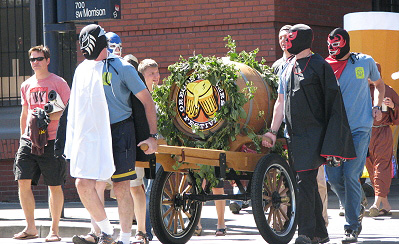 Somehow I ended up at the forefront of the parade, right behind the Widmer team and the cask. I was sandwiched between Rogue Nation members “The Bishop” and “Doc”. Doc and the Bishop had obviously thought long and hard about the visual statement they wanted to make during the parade. They’d created custom cat-o-nine-cap floggers with leather and beer caps for the purpose of stylized self flagellation on the parade route. What could be more natural than a little self flagellation during my religious pilgrimage to the heart of Beervana? Since I hadn’t brought my own personal flogger, I had to improvise.

The monk robe came with a rope belt, but that alone would not be harsh enough for a Rogue Monk, I attached my OBF sample mug to the end and gave myself a smack on the back. Oh yeah, that’s the ticket. I was joined by The Bishop and Doc and we slapped ourselves with the tempo of the drumming. I’m sure we made quite a picture for the smiling citizens of Portland as they filled the windows and doorways to cheer us on.

The parade was supposed to stay on the sidewalk, but, like the explosive growth of the Oregon Brewer’s Festival itself, boundaries couldn’t contain us and we spilled out onto the street to wave to the people of Portland and invite them to come see what real craft beer is all about. The Widmer masked marauders abandoned the sidewalk as well and brought the cask to the forefront of the group. The parade route distance between PGE Park and the River was quickly devoured by our eager feet as we walked towards Tom McCall Park and the official tapping of an inaugural keg of Widmer Broken Halo IPA and the opening of the 21st annual Oregon Brewers Festival where the ceremonial mallet was passed to another Oregon iconic brewery, Full Sail Ale, for the honors in 2009. 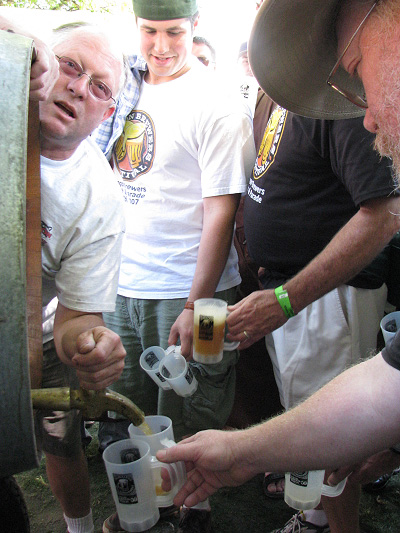 The Oregon Brewer’s Festival, founded by Portland’s earliest microbrew pioneers, Art Larrance (cofounder of Portland Brewery, now of Raccoon Lodge Brewpub), Dick and Nancy Ponzi (founders of Bridgeport brewery) and Kurt and Rob Widmer (duh!) has grown exponentially since its modest beginnings in 1988 with offerings of 16 beers from 13 breweries. That first year they expected 5000 attendee’s and received three times that. This year the OBF featured 72 breweries from all across the nation and drew a record crowd of 70,000 for 4 wonderfully mild days of beer quaffing. 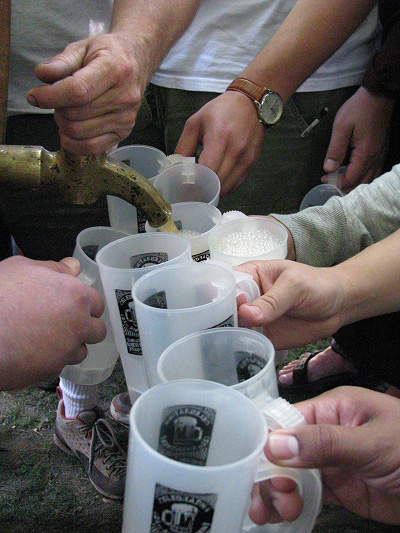 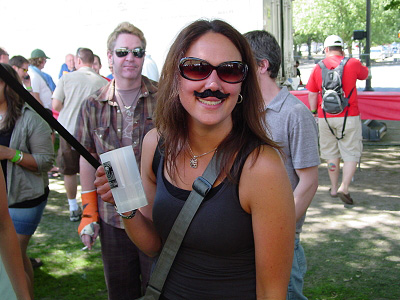 I tried about half the beers offered at the fest over 3 days. (Hey I’ve only got a limited number of brain cells left to kill.) Here are some interesting brews I found.

Foggy Goggle White by Fifty Fifty Brewing Co. – Another interesting beer from Todd Ashman. A Belgian Wit that was a little tart, a little sour and all good. Clean and very drinkable

Calypso Ale by Roots Organic Brewing Co. – This self described “Hybrid” is brewed with organic red wheat, lightly hopped with German Hallertaur and inoculated with locally grown apricot and scotch bonnet peppers. Starts off as a delicious fruit ale, but beware, the hot pepper sensation comes on slowly and builds at the back of the throat. I would have enjoyed it more with the right food. I look forward to trying it again with some Mexican food soon.

Plinty the Elder Double IPA by Russian River Brewing Co. – Voted best beer by hand count at the media tasting and the beer I heard talked about the most at the fest. One of the most balanced double IPAs I’ve ever tasted. Plinty the Elder has a wonderful aroma that matches an exceptionally complex taste. Excellent balance of malt sweetness and hop bitterness….neither dominated the other…but both are apparent.

Coffee Bender by Surly Brewing Co. – A favorite of everyone I spoke to and a gold medal winner at last years GABF. Eye opening and delicious, if you like the taste of good coffee you’ll love this American brown ale. 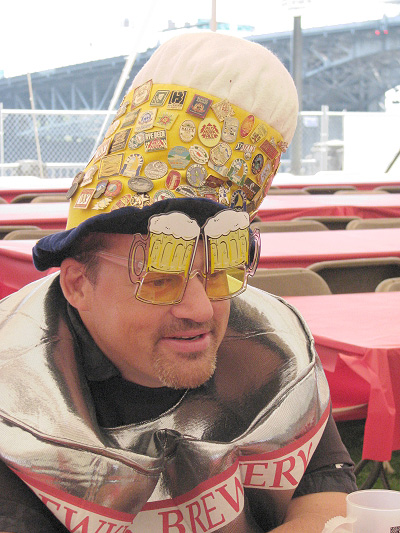 Well, a week of excellent weather matched with a fantastic lineup of beers chalks another one up in the win column for OBF. Of course great beer is always around in Portland, but nothing matches the ridiculous pageantry and just plain fun atmosphere in Beervana during the little fest we Oregonians think is best…The Oregon Brewer’s Festival. 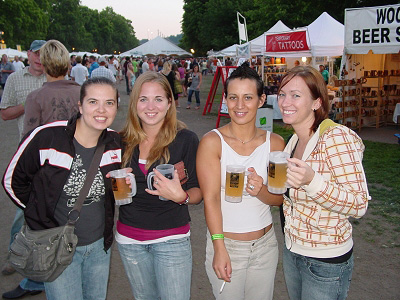 For more fest info check www.oregonbrewfest.com
To see all of the pictures from this year’s event, see my Flickr gallery. 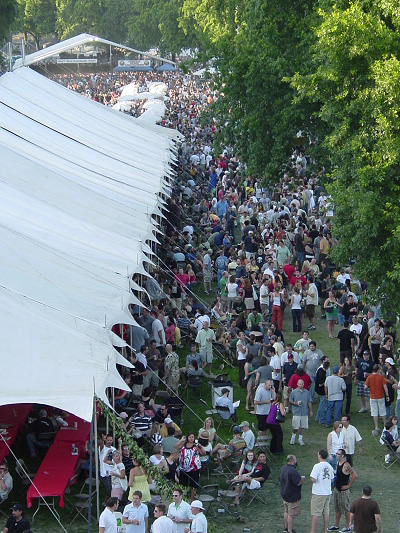 One Reply to “The Oregon Brewers Festival Turns 21”