Old Bawdy Barley Wine is Pike’s most extreme beer. With a high, starting gravity of 1.096 Old Bawdy has 10% alcohol by volume. The color, like a shiny new penny has amber highlights and a nose that is floral and sensual, like a bouquet of freshly picked flowers. Old Bawdy was brewed by Head Brewer Drew Cluley, second Brewer Dean Mochizuki and the Pike team of brewers and brewsters. The grist blend is made with enormous quantities of the finest biscuity malts. Pike Old Bawdy 2008 is sweet and earthy with the flavor of pale, crystal and wheat malts playing off of one another like sunshine on a field of barley. Balancing this liquid bread are incredible quantities of an herbal blend of Columbus, Magnum, Chinook and Centennial hops, all from the Yakima Valley. On the palate Old Bawdy is powerful, rich and complex with a smooth, full round mouth-feel and a fine balance of sweet and bitter, drinking as if it were much lighter in alcohol. The finish is long and satisfying with a slight essence of grapefruit. 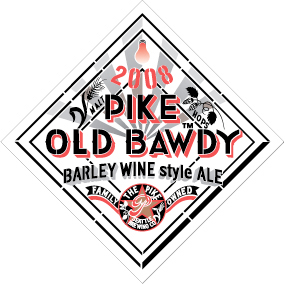 Pike Old Bawdy, brewed only once a year, was first introduced in 1991. As the beer has been brewed through the years an evolution in taste has occurred as we strive to create a classic, particularly one that is a great accompaniment to food. Since The Pike Brewery was founded in the LaSalle Hotel one of Seattle’s most infamous bawdy houses (brothels), the Old Bawdy label features a red light bulb in reference to “Naughty Nellie,” the beautiful madam who converted an old seaman’s hotel into a luxurious home away from home for gentlemen visiting Seattle’s historic Pike Place Public Market, America’s oldest. Though strong beers called barley wines had been brewed in Great Britain for centuries, by the late 1970s most were no longer being produced. At the time that Old Bawdy was introduced under Head Brewer Fal Allen, it was among the first of a new breed of hand crafted American barley wines and was an immediate success. Pike Old Bawdy was brewed from 1991 through 1997 at which time Pike founders, Charles and Rose Ann Finkel, sold the brewery and the beer was discontinued. The Finkels re-acquired The Pike Brewing Company in 2006 and in restoring and re-organizing the brewery, unearthed a treasure trove of the elixir from earlier vintages in both kegs and bottles. Earlier vintages, like 1996 and 1997 had matured beautifully. The 2006 vintage was lovingly brewed and released in early 2007. By contrasting this vintage with significantly older ones, the potential for aging was evident and the decision was made to establish a library of each year’s beer. Customers look forward to experiencing each vintage.

2009 marks Pike’s 20th Anniversary. To celebrate, special events will be held throughout the year culminating in a week-long celebration leading up to our actual birthday, October 17, 2009. On Sunday, February 8, 2009 Pike’s Microbrewery Museum will be the venue for A Vertical Tasting of 1994, 1996, 1997, 2006, 2007 and 2008 Old Bawdy Barley Wines. This event will be limited to 100 people; we recommend reservations. If you live in the Seattle area and want to attend, here are the details: