Full Sail Brewing has announced the special release of Black Gold Bourbon Barrel Aged Imperial Stout 2009. This
highly anticipated release from Full Sail’s vintage barrel series has been a Full Sail brewing tradition since 1998. Every year since, Full Sail’s talented team of brewers brew an Imperial style dark ale and fill roughly sixty oak bourbon barrel casks, then age them in their cellar for about a year.

“Wood and barrel aging is an art form that takes dedication, patience and care. We brew this special beer in small batches, that’s why it is available in very limited quantities. You should get some while you can,” explained Jamie Emmerson, Full Sail’s Brewmaster. 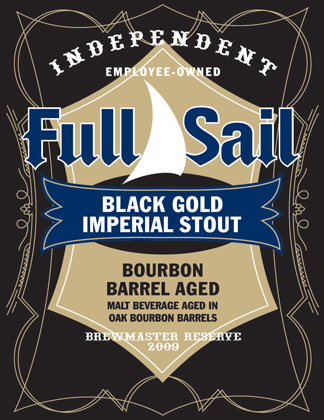 The beer will be released in early February. According to Emmerson, it was initially brewed in February 2008, and released as Full Sail Imperial Stout. A portion of the batch was reserved and aged for almost a year in Bourbon casks from Kentucky to create Black Gold. “This extended aging presents hints of vanilla and allows the Stout to pick up the flavors of the wood, bourbon and oak. The aging combined with the robust character of the Imperial Stout make for an extraordinary and wonderful taste experience. It has a strong roasted malt character and a full body. Chocolate and caramel nuances blend with the hops for a smooth Imperial Stout,” described Jamie. “It cellars well, if you store a few bottles in a dark, cool place and be patient – you will be rewarded for your effort and restraint,” To help the beer aficionados that have the self-discipline to cellar this beer, Full Sail marks the bottle label with the reserve year. Black Gold will be available in 22 oz bottles and on draught. (ABV 10.5%, IBU 65)

If you’re near the Mt. Hood, Oregon, area, Full Sail is planning a special event to celebrate the release of Black Gold. The brewery will be pouring three of their wood-aged beers including bourbon-barrel-aged 2002 and 2008 Top Sail Imperial Porter, and 2009 Black Gold Imperial Stout. The special tapping will take place at 5 p.m., Monday, February 2nd at Full Sail’s River place Brewery in Portland, Oregon and at 5 p.m., Thursday, February 5th at the Full Sail Tasting Room and Pub in Hood River. For more information call the Full Sail River place brewery at 503-222-5343 or the Full Sail Tasting Room and Pub at 541-386-2247.