Trying to squelch a beery urban legend that has been misquoted by historians and beer enthusiasts since the early days of Repeal, Dick Stevens, owner of the Elevator Brewery & Draught Haus has decided to belly-up to the bar, so to speak, and replace t-shirts sold at the award-winning brewery and eatery that incorrectly attributes Benjamin Franklin to a much quoted phrase that the Founding Father never uttered. Beer-themed web sites, brewing organizations and even “beer writers” are fond of quoting Franklin and his supposed love of beer – “Beer is proof that God loves us and wants us to be happy.”

But after recently hearing a lecture by Chicago-based brewing historian, Bob Skilnik, that convincingly asserts that Franklin was writing about rain, its nourishment of grapes, and ultimately, its conversion into wine, Stevens decided to do his part in correcting this historical inaccuracy. 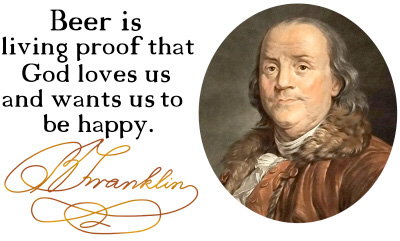 “We do everything we can to serve up the best tasting beers at the Elevator,” says Stevens, “always striving to brew them true to style. To then sell or give away t-shirts that quote a historical untruth is simply not our style. I hope that we can set the record straight about this little white lie that has been repeated for years. I have no doubt that ole Ben enjoyed a tankard or two of beer with friends and associates, but this beer quote, while well-meaning, is inaccurate.”

He adds, “To all our customers who have purchased the erroneously quoted Ben Franklin t-shirts, we do apologize and ask that they return the t-shirts to the Elevator where we will immediately exchange it for a new t-shirt, free of charge. Let me emphasize that this recall will entail absolutely no cost to our loyal customers, and help them save face.”