Paul Kalmanovitz was a Polish immigrant who made millions in real estate before turning his attentions to beer in 1950. In that year he bought the Los Angeles-based Maier Brewing Co. Over the next couple of decades he bought out other struggling breweries, too, eventually ending up with a sizable portfolio of brands that included Ballantine, Blatz, Carling Black Label, Lone Star, Lucky Lager, Falstaff, National Bohemian, Old Milwaukee, Olympia, Primo, Rainier, Schlitz, Schaefer, Schmidt, Stag, Stroh’s and Pabst. When Kalmanovitz passed away in 1997, he left a sizable estate, something on the order of between a quarter and a half-a-billion dollars. Despite litigious distant relatives, most of the money eventually wound up in a charitable trust, the Kalmanovitz Charitable Foundation. Unfortunately, for reasons not entirely clear, the I.R.S. “frowns” on a charity owning a beer company. The I.R.S. gave the foundation until 2005 to sell the beer portion of the estate, but they were unable to find a buyer so they were given an extension until 2010.

But Pabst’s recent success with its retro brand positioning may command a higher price, if a potential buyer can be found. The problem is who? Neither A-B or MillerCoors seem interested and not even the largest microbrewery could afford it. That leaves the global beer companies. Obviously, InBev is a little tied up with the buyout of A-B. There’s also Carlsberg, Heineken and a few others, but so far none have shown any interest, either. That leaves non-beer investors, but historically such ventures have been risky at best. The more money they can get, the better funded the charity can be, and the more worthy causes they can help. That means it’s in their best interests to wait for the best price. For that reason, some critics have accused the foundation of dragging their heels. Of course, the I.R.S. isn’t known for their patience so at some point a sale will have to take place, and possibly in the next two years. 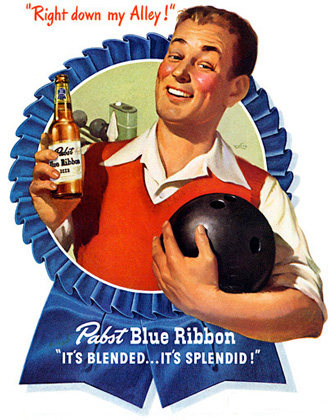 Cash to spare? Wanna buy a beer company? Strike now or be bowled over.