Today is the late Michael Jackson’s birthday. He would have been 67 today, but passed away in August of 2006. To honor his memory and contribution to beer and whisky, a book was published today featuring new short works or essays by a baker’s dozen of beer and whisky writers. The new works were all donated by the authors and the proceeds of the book will be donated to the Parkinson’s Disease Society. I looks to be a worthwhile addition to your library. The authors are Stephen Beaumont, Dave Broom, Ian Buxton, John Hansell, Julie Johnson, Charles MacLean, Hans Offringa, F. Paul Pacult, Roger Protz, Lucy Saunders, Conrad Seidl, Carolyn Smagalski and Gavin D. Smith. 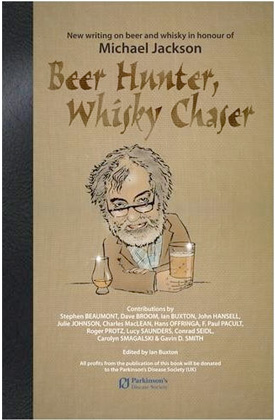 And it’s for a good cause. I’d say buy it on Amazon, but it’s not showing as being available. So look for it at your local bookstore soon. It would also make a lovely gift, don’t you think?

Editor Ian Buxton, who conceived the project, said “Michael Jackson dominated the world of both beer and whisky writing for two decades and was hugely influential in both ‘real ale’ and single malt whisky. A complete generation of writers has cause to be grateful to him, not to mention countless brewers and distillers. This new book honours that legacy.”