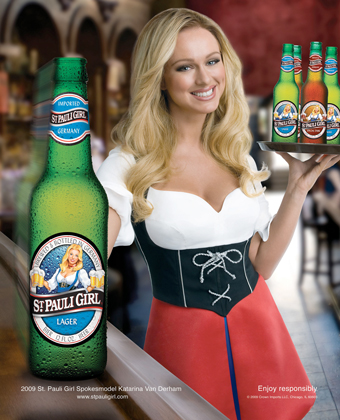 “Being named the 2009 St. Pauli Girl means the world to me,” said Van Derham. “I am very honored and look forward to meeting St. Pauli Girl fans all over the country.”

Van Derham grew up in a small village in the woods of Slovakia, a communist country at the time. She moved to the United States at the age of 22, without any intention of becoming a model. While working as a waitress in Los Angeles, she was often told to pursue modeling, and at age 26 finally decided to give it a shot. Van Derham was immediately booked for several modeling jobs, and in a short time her career has skyrocketed.

Van Derham can be seen in advertising campaigns for AT&T, Dodge, Rockstar Energy Drinks, Ed Hardy and Christian Audigier. On television she has had roles on shows including “Monk” and “CSI,” and has also appeared in the films “Cellular” and “15 Minutes.” Van Derham has graced the cover of dozens of magazines both in the U.S. and internationally including Iron Man, Max Muscle, Muscle & Fitness, Best Body, Double XL, British Maxim and more.

Van Derham became a U.S. citizen last year, and was very appreciative to vote in her first ever election in November 2008. In addition to her modeling work, Van Derham also works in web design for an architectural graphic design firm.