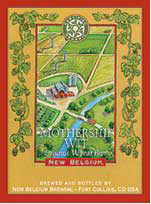 While regulars at Coleman’s Irish Pub in Syracuse, N.Y., celebrated the arrival of green beer for St. Patrick’s Day, a different sort of green beer was in the spotlight during the Oscars.

New Belgium Brewing’s first organic beer, Mothership Wit, and its signature Fat Tire Amber Ale were served at that party and several other pre-Oscare events. The Fort Collins beer also was served at Oscar-related charity fundraisers held Thursday and Friday to benefit the environment and other causes.