Alaskan Brewing Co. announced that it will expand the limited release of its award-winning Alaskan Barley Wine to all ten western states where Alaskan beer is distributed. Alaskan Barley Wine has been produced in limited edition batches each year since its introduction at the Great Alaska Beer and Barley Wine Festival in 2003.

“It is a big beer for our big Alaska winters,” said Co-founder and Brewmaster Geoff Larson. “This brew garnered a steady following in Alaska, but people from all over the country were asking when they could buy Alaskan Barley Wine in bottles.”

The brewery finally answered the call last January, releasing the 2007 Alaskan Barley Wine in 22-ounce bottles for the first time in Alaska, Washington and Oregon, but it wasn’t available for long.

“It was in and out,” says Matt Maples at Liquid Solutions, a national internet-based beverage distribution company, of the 2007 Alaskan Barley Wine. “We started with 55 cases – they sold out in less than a week.” Maples was not surprised about the high demand for the 22-ounce bottles, “People make a lot of crazy barley wines, but this one is so well put together and balanced it’s quite the hot ticket.”

Alaskan Barley Wine is a full-bodied ale, deep mahogany in color and brewed with an array of complementing malts to achieve its high original gravity. Multiple hop additions in the boil and dry hopping during fermentation provide contrast to the big malt character resulting in the smooth balance that distinguishes this specialty brew. 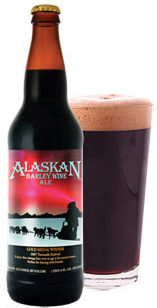 Like a fine wine, Alaskan Barley Wine can be aged for years. The bottling of each vintage of Alaskan Barley Wine will allow individuals to age it to their liking. “Those that prefer a fresh, dynamic and flavorful barley wine can enjoy it right away,” says Quality Assurance Analyst Darin Jensen. “This is also a great cellaring beer that will gain deeper malt complexity and smoothness over time.

“Many American barley wines tend to go to flavor extremes; it can taste like there is a mosh pit going on in your mouth,” says the musically inclined Jensen. “The beauty of Alaskan Barley Wine is in the balance between hop bitterness, big malt sweetness and high alcohol. This one crowd surfs over your palate, especially with age.”

The 2008 vintage of Alaskan Barley Wine will be available in January in select retail locations in Alaska, Arizona, California, Colorado, Idaho, Montana, Nevada, Oregon, Washington and Wyoming. For those who live elsewhere, it will be available online at www.liquidsolutions.biz. 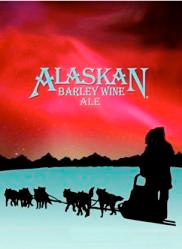 The label comes from the Alaska Natives who first trained dog teams for winter transportation to the Russian and American settlers of the 19th century to today’s Iditarod Trail Sled Dog Race, the history of Alaska is tethered alongside the history of dog mushing. Dog teams were the primary source of winter transportation in Alaska before the advent of the airplane and are widely used even today for sport racing as well as travel in remote areas of the state.