Last month, well-known novelist Tom Robbins published his latest book, entitled “B Is for Beer.” The publisher’s website describes it as “A Children’s Book About Beer?”

Yes, believe it or not—but B Is for Beer is also a book for adults, and bear in mind that it’s the work of maverick bestselling novelist Tom Robbins, inter-nationally known for his ability to both seriously illuminate and comically entertain.

Once upon a time (right about now) there was a planet (how about this one?) whose inhabitants consumed thirty-six billion gallons of beer each year (it’s a fact, you can Google it). Among those affected, each in his or her own way, by all the bubbles, burps, and foam, was a smart, wide-eyed, adventurous kindergartner named Gracie; her distracted mommy; her insensitive dad; her non-conformist uncle; and a magical, butt-kicking intruder from a world within our world.

Populated by the aforementioned characters—and as charming as it may be subversive—B Is for Beer involves readers, young and old, in a surprising, far-reaching investigation into the limits of reality, the transformative powers of children, and, of course, the ultimate meaning of a tall, cold brewski. 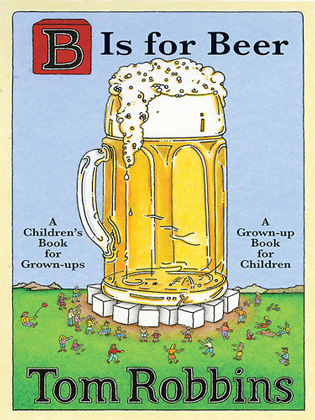 Having just finished reading the 125-page novella, I can say it’s a fun read and I heartily recommend it.

3 Replies to “Tom Robbins’ B Is for Beer”