The Texas-based restaurant chain kicked off its poll in early September, and polling lasts until election night, Tuesday, Nov. 4. Customers can “vote” for their favorite candidate by purchasing special pint glasses for $5. Votes are tallied and updated at the end of each day, and customers can vote as many times as they like.

“People often discuss politics over a beer, so what better way to get in the spirit of the election than to combine the two – and get to vote for your candidate as many times as you like!” said Shannon Wynne, owner of The Flying Saucer. “Senator Obama leads overall and in the majority of our markets, but Senator McCain does lead in a few. The Flying Saucer is present in several battleground states, so it’s pretty interesting when you look at the breakdown of votes.” 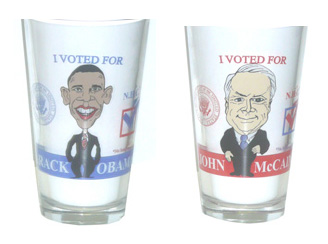 The Flying Saucer is hosting the 2008 poll at all of its 13 locations in six states, which include Dallas, Austin, Fort Worth, Houston and San Antonio, Texas; Kansas City, Mo.; Little Rock, Ark.; Cordova, Memphis and Nashville, Tenn.; Charlotte and Raleigh, N.C.; and Columbia, S.C. Polling data for each location is listed, and appears to updated daily, along with a running total.