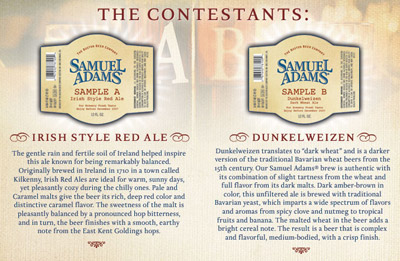 Boston Beer Co., brewer of Samuel Adams beers, has begun conducting tastings around the country where consumers can help pick one of the beers that will be sold in the 2008 Brewmaster’s Collection 12-pack. The winning beer will also be sold in six-packs.

In similar contests, a Brown Ale won voting in 2005 while Honey Porter bested a Smoked Lager in 2006.

Information about where to find a tasting event is at the Samuel Adams web site.

One Reply to “The Dunkelweizen, Irish Red referendum”