One of the efficiencies in large brewery acquisitions that we always assumed was a factor was that large brands would start to be brewed at the acquired breweries — to make the distribution that much more efficient. In the latest example of that happening, Heineken owned Lagunitas has started brewing Newcastle Brown Ale. 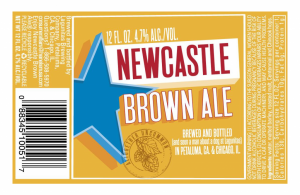 Tip of the cap to them for acknowledging this brewing location right on the label. Some other large breweries could learn a lesson here.

In the future, when ordering a Newkie at a bar, feel free to complain that it shouldn’t be priced like an import since it’s brewed in the US now. But don’t expect that actually work to get a cheaper beer.

In the event you missed the dust up between British beer writer Roger Protz and upstart Scottish brewery BrewDog you might start with a little background if you are to appreciate this cartoon from The Publican.

– Cincinnati Restaurant Group Inc., which operates a Hofbräuhaus in Newport, Ky., under license from the famous beer hall of the same name in Munich, Germany, announced it had dropped plans to either lease or buy the former Pabst visitors center and hall inn Milwaukee. However, a spokesman for the group said they are still looking at other locations at the former Pabst complex, now known as The Brewery. Meanwhile a developer proceeding with plans to operate a tavern at the visitors center and Blue Ribbon Hall.

– Heineken has reached an agreement with India-based United Breweries that will allow the Dutch brewer to brew and sell its own brand of beer in that growing market. Heineken’s managed the breakthrough via a deal with Indian tycoon Vijay Mallya and his United Breweries, brewer of Kingfisher, to distribute Heineken beer in what it called “one of the world’s fastest growing and most exciting beer markets.” The Wall Street Journal has details about the intricate transaction, revealing how complicated the business of big beer can be.