Finland can limit beer carried by people arriving from non-EU countries including Russia to 16 liters until the end of 2007 under the European legislation.

The real reason to do this is that beer costs less in Russia.

[Via the Moscow Times]

The Publican in Britain asked a variety of beer types what beer they’d serve with a Christmas turkey. We particularly like the reply from Ben McFarland (beer writer of the year):

At Christmas, you need a beer that copes with every potentially disastrous gastronomic eventuality. If the turkey ends up drier than a pensioner’s elbow, if the sprouts resemble charcoal and if you set fire to the pub using too much cheap brandy on the Christmas pudding, then a refreshing, thirst-quenching lager is the first thing your parched palate will be wanting in its Christmas stocking.

I suggest a dainty lager called Lapin Kulta. Brewed by female brewers in the upper reaches of Lapland, Lapin Kulta is Santa’s local beer and is perfect for drinking after a hard day harrying elves, gift-wrapping and putting up with spoilt little eight-year-olds. It’s also a festive alternative to the chewy charms of the full-bodied Christmas ales so often sipped at this time of the year.

What beer do you suppose he’d suggest drinking along with the movie Bad Santa?

During 2005, the online publicaton Slate covered the war in Iraq, Hurricane Katrina, and the future of the Supreme Court, but the most popular stories were, for the most part, about dogs, beer, celebrities, and naked ladies.

No. 9 on the list: Welcome to Miller Time, The great American beer crisis.

Always interesting to see how those not as involved with specialty beer as we are think about beer.

The Internal Revenue Service has ruled that shareholders and employees of Summit Brewing Co., who get two free cases of beer each month, will be taxed for the beer beginning in 2006.

Goose Island president and founder John Hall confirmed as much, but said discussions have been limited to “distribution issues.” He declined to comment further on the nature of the talks.

“Its wholesalers are clamoring for high-margin, growth brands,” said Benj Steinman, editor of Beer Marketer’s Insights, told the Tribune. “Anheuser has promised to deliver them, but they can’t just create them.”

A-B reportedly is talking with other microbreweries about distribution deals or taking a stake in the companies, including Old Dominion in Virginia.

The girls are posed in 12 vignettes to represent beers such as Matrimony Ale, Farmer Jon’s Oatmeal Stout and Not Tonight Honey Porter.

Fifty percent of all proceeds from the calendar to the Heartland Brewery Foundation, with funds earmarked for the New York chapters of the Juvenile Diabetes Foundation and National Multiple Sclerosis Society and Billy Joel’s Charity Begins at Home.

You wouldn’t have heard this exchange last year:

“Have you tried the new bourbon oak barrel beer from Anheuser-Busch?”

A-B regularly tests a variety of products in many markets, often with hopes they’ll develop into something bigger. That’s not the plan with three beers available now – they are one-offs (seasonals) willing to appeal to a smaller audience. The beers:

Celebrate: A 10% abv lager infused with with milled vanilla beans and aged with heavily toasted bourbon oak barrel staves in the maturation tank.

Brew Masters’ Private Reserve: An 8.5% lager brewed only with first runnings (the richest part of the mash) and offered in a 46.5-ounce magnum bottle.

Not only are these beers different, but producing them is as well. At the A-B plant in St. Louis where Celebrate and Private Reserve were brewed a small run usually produces 3,000 barrels (9,300 gallons of beer). These two were brewed in smaller quantities.

“We’ve been learning to use our equipment in a more flexible way,” said brewer Nathaniel Davis, a member of the New Products Group formed in 2004. “We’re coming at these beer from the consumer’s standpoint. We’ve scaled down or used partial tanks, and this allows us not to require enormous volume.”

Although A-B has not released a holiday-type beer since the late 1990s, the company has a tradition of brewing such specials. “We have evidence of rich Christmas brews, but we don’t have the recipes,” Davis said. In earlier days, these beers were sometimes made only at local breweries and given to employees and special customers.

The Private Reserve comes with a swing top closure. “It lends itself to camaraderie. The pop is like a champagne cork,” Davis said. He said the beer has enough carbonation to pop a couple of times, but the beer really is meant to be consumed in a single session by several drinkers.

“I like it as it warms up,” he said. The same is true of Celebrate, which is sold by the single 24-ounce bottle or with two 13.5-ounce snifters. “You want to serve it in an appropriately wide glass. You really want it to open up,” Davis said.

“I’d taste it (Celebrate) up to room temperature,” Davis said. “I’ve even mulled it.”

Is there a target audience for these beers? “We are getting tremendous feedback across the board,” Davis said. “We love to talk about beer. We’re passionate about what we’re doing.”

“Michelob Celebrate is a lager beer best enjoyed while sipping at room temperature. … Although both beers share a few of the ingredients we’ve found people enjoy during the winter and holiday seasons – each one has a distinct taste.”

Just as Davis points out the swing top on Private Reserve invites sharing, Kuplent says Bourbon Cask is designed to be enjoyed in a communal setting. “It’s a great complement to an evening out with friends and family and is perfect for enjoying over storytelling, taking refuge from the stresses of the day, and escaping the blustery weather outdoors,” he said.

A quick note: The St. Louis Post-Dispatch recently profiled the Research Pilot Brewery and the Brewing New Products Group. An interesting read, including the fact that Chairman August A. Busch III suggested a beer using blueberries.

The creators of the German Museum of Hops in Wolnzach claim they’ve created the largest hop cone in the world. It’s five meters high, built on a scale of 1 million to one and museum visitors can walk through it, sniffing hops if they press the right button. The museum opened in June.

A Harvard professor moonlighting for beer giant Anheuser-Busch finds himself under fire from substance abuse counselors for saying the benefits of moderate alcohol consumption outweigh the risks. And for how he appears to be benefiting from the stance.

Meir Stampfer, a leading researcher on alcohol consumption, has traveled to Chicago and New York to tout the benefits of alcohol at Anheuser-Busch sponsored lunches.

While the company never paid Stampfer for his talks, it footed his travel expenses and donated $150,000 in scholarship money to the Harvard School of Public Health.

Laurie Daniel, who more usually writes about wine for The Mercury News, tells readers “the holidays are a great time to revisit beer. That’s because there’s a wonderful array of winter brews available now.”

She tastes a range and offers tasting notes, some you may know well and others you may want to get to know.

Summit Brewing workers get plenty of benefits and free beer every month. But the perk the employees are most excited about is the partial ownership that the beermaker made available to them this year.

“I can see the efforts of my work,” said Tim Daly, an area sales manager, who has been at Summit six years. “It’s a workplace you like to come to. I had never had that before.” 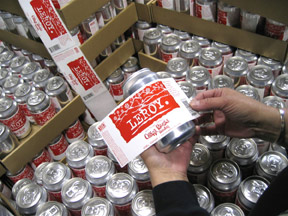 Gordon and Leroy both carry hand-applied labels, in part because only 400 cases of each beer have been produced. Microcanners must purchase their cans in lots of about 250,000 cans. That large number of cans is a hurdle to releasing small batches of canned seasonal beers.

“These beers are a canned gift to our fans,” says Oskar Blues founder Dale Katechis.

Gordon – previously available only on draft at the brewery’s pub – is made with six different malts and three types of hops, and dry-hopped with whole cones of Amarillo hops. It is 9.3% alcohol by volume, and has 85 IBU.

Leroy is an unfiltered American-style brown ale made with five different malts and four kinds of US and UK hops. A “session” beer, it checks in at 5.2% abv.

More than 350 Washington, D.C., types turned up at the fourth annual Holiday Beer Tasting for Congressional staffers and members.

Since we’re pretty meticulous about reporting the possible benefits of moderate drinking, it seems only fair to let a professor of epidemiology at the University of Auckland, in New Zealand, take the other side.

Dr. Rod Jackson and his colleagues make their case in an article in the Dec. 3 issue of The Lancet.

Could Mexico be developing a microbrewery culture?

SignOnSanDiego.com reports Tijuana’s International Beer Festival was a step in the right direction.

“We don’t have the money to compete” with Corona, Pacifico, Dos Equis and other megabrews, one microbrewery owner said. “But I can provide to my customers what the others can’t, even with all their money. Because it’s not about a marketing concept.”