Killing the Golden Goose — The 1900% Beer Tax Hike would be a knife in the heart of Oregon’s Craft Beer Industry.

I recently made a trip up to Portland to attend the “No New Oregon Beer Tax Rally” at the Green Dragon. What I found out about the tax hike proposed by Oregon House Bill 2461 shocked me and left me worried for the future of Oregon’s world famous craft brewing industry. HB 2461 was sponsored by five Oregon Legislatures (Representative CANNON, Senators DINGFELDER and MORRISETTE; Representative DEMBROW, and Senator ROSENBAUM) who will be referred to from here on as the “Fab-5” for purposes of brevity. 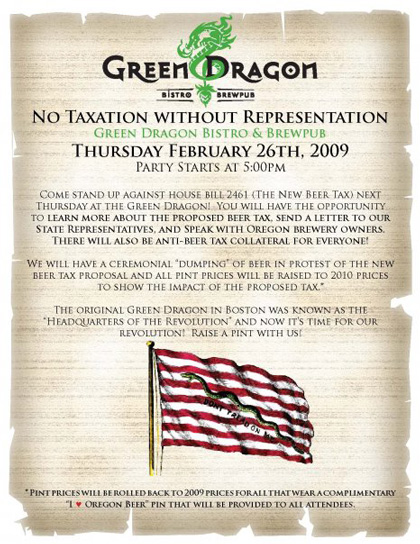 I wonder if the Fab-5 ever heard the old adage “Every solution presents a whole new set of problems”? I’m don’t believe the Fab-5 really bothered to look at the problems their “solution” for funding additional state mental health, drug, and alcohol treatment programs would create when they sponsored HB 2461 which proposes a 1900% increase in the barrel tax on beer in Oregon. That’s not a typo! They would like to raise the tax on a barrel of beer from $2.60 per barrel to $52.21 which is a 1900% increase.

They downplay the bill as a reasonable and minor tax increase needed because Oregon’s beer tax, ranked 47th in the nation, is too low. Huh? Let me get this straight. Your main argument for raising the tax I pay on a pint of beer 1900% is “Well the tax hasn’t been raised in a long time.” Not because it is right or fair, or because there is a demonstrable cause and effect between beer and these programs they seek to fund with this tax, but simply because the tax hasn’t been raised since 1977.

Sorry that’s not a good enough reason to damage the states beer industry and the Oregon microbrewers that have grown into a vibrant Oregon success story that creates roughly 15,000 direct and indirect beer industry related jobs in this state. Not only does Oregon’s craft beer fill our pint glasses with world-class artisanal brew, it has created a “beer tourism” draw that many peripheral Oregon businesses’ benefit from.

If the Fab-5 insists on looking back to 1977, let’s take a look at how many barrels of beer were being consumed in Oregon then. Numbers are hard to come by but I did discover a study on Oregon’s bottle bill that puts the consumption in 1973 at roughly 1.5 million barrels (By the way, Blitz-Weinhard was the only brewery in Oregon back then). Using that as a starting point, the taxes generated by those sales were approximately $3.9 million. Last year Oregonians consumed 2.72 million barrels of beer, resulting in over $7 million in revenue from the current tax. Whereas the Fab-5 keeps waving the “no increase since 1977” flag, they seem to have completely missed the fact that tax revenues from beer have increased about 56% in that same time-span.

Of course that doesn’t add in the revenues they reap from having close to 90 breweries here in the state, providing jobs and paying business, property, and income taxes. They wouldn’t want to muddy the water with a bunch of facts that don’t support their position.

The other major point pushed by HB 2461 is these additional taxes are needed to pay for additional state mental health, drug, and alcohol treatment programs. Out of $155.8 million in net revenue from alcohol excise taxes in 2008 only $7.9 million was targeted to those programs. I do not dispute the fact that these programs are important, I do however wonder why these important programs are being so woefully underfunded and why Oregon’s beer drinkers are expected to shoulder the entire burden. Oh, and one other thing…Um…this may seem like a silly question, but that $155.8 million is NET revenue not gross revenue, could you tell me exactly where the other $147.9 million dollars you collected went?

Passage of HB 2461 would add another $135 million in Oregon alcohol excise tax revenue to the state coffers, effectively doubling Oregon alcohol tax revenues on the back of beer alone whose contribution would be $142 million at current consumption levels. Of course that won’t be the cost to the Oregon consumer, oh no. The Fab-5 keeps saying the new tax will only add an additional 15 cents per 12 oz. onto the cost of beer. It’s a good thing they’re in government because they’d never survive in business. Anyone who has been in business is familiar with the concept of acceptable profit margins a business needs to maintain to stay in business. If they aren’t they probably are no longer in business. (They’re most likely now working in government) Maintaining profitability margins through the system for all the players involved from brewery to glass puts the actual impact of that 15 cent increase at the wholesale level at a $1.50 per pint when it finally reaches the consumer. The overall impact on Oregon beer drinkers will be about $315 million at current consumption levels. 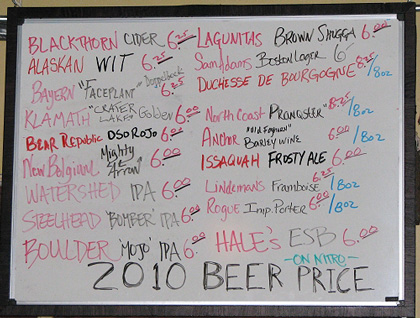 This will be a boon for our border states who will see a dramatic increase in sales to Oregonians who will jump state lines to purchase their beer in bulk, or patronize pubs where they can purchase beer at a much lower price (even Oregon beer).
Those who follow the beer industry are aware the last two years have been extremely difficult due to shortages and huge price increases in the costs of raw materials. Those price increases have already negatively impacted the profit margin on each barrel of beer nationwide and resulted in increases in beer prices. What a great time to slap a hefty increase on the industry.

Was the Fab-5 paying attention during the recent gas price crisis? It’s simple economics. This is how it worked, the more the consumer was charged for gas, the less they purchased. The less they purchased, the less tax per gallon was collected for the Oregon coffers. What did this lead to? A state government proposal to raise the gas tax. If the HB 2461 tax increase impacts the industry in the same way, and many believe it will, then it will result in reduced beer, and more importantly to our states craft beer industry, drastically reduced craft beer consumption. What will the state do when this tax doesn’t achieve its goals because of reduced consumption? Hmmmm, history indicates they’ll probably vote to raise it again to make up the deficit. This will create a hostile tax environment for craft breweries and spell the beginning of the end for growth of the craft brewing industry in Oregon.

A timely article in the March 4th Guardian discusses the woeful impact of 2008’s 18% beer tax increase in the UK. To date “A record 2,000 British pubs have closed with the loss of 20,000 jobs since the chancellor, Alistair Darling, increased beer tax in the 2008 budget.” “A separate forecast by Oxford Economics that 75,000 more jobs in the drinks industry are at risk.”

The proposed 1900% increase HB 2461 mandates would make Oregon’s Beer Tax the highest in the good old USA. 37% higher than the current number one state, Alaska. (Yea for us, we’ll be #1!) Are Oregonians so prosperous the state government leeches need to bleed us of our excess income? Well let’s evaluate how Oregon ranks compared the other states.

So what other categories does Oregon rank so high? There must be something that flips a switch in a lawmaker’s head to go down this road to ruin. Let’s see, could it be our personal tax burden is too low? No, looks like we’re 5th highest in the nation so that’s not it. What about our economy, are we on fire and need some additional taxes to slow it down and get our expansion under control? No, that’s not it either, the Oregon economy is ranked 35th. In case your calculator isn’t working, that means 34 states are in better economic shape than good old Oregon.

We do have the auspicious honor of being the nations 5th highest in unemployment, a number that I’m sure will climb towards that coveted #1 spot as our pubs close and our microbreweries move to other states with the passage of this poorly thought out legislative solution. If you agree this is a bad idea send Oregon Legislators a message through the Oregon Brewer’s Guild at http://oregonbeer.org/no-new-oregon-beer-tax.