Hop Heads rejoice! There’s a new IPA in town. Karl Strauss Brewing is excited to introduce Tower 10 IPA—a bold, flavorful American-style IPA and the latest addition to their core lineup. San Diego is well known for their IPA’s, and as a San Diego native, Karl Strauss wanted to release their version of what a great American IPA should be.

Tower 10 IPA is brewed with a blend of caramel and pale two row malts and large amounts of classic Pacific Northwest Cascade, Chinook, and Centennial hops. After fermentation, over a pound of Cascade and Centennial hops are used to dry hop the beer for extra citrus aroma and flavor. Tower 10 IPA comes in at 6.5% ABV and 60 IBUs. “We’ve got a few hopheads around here and we wanted to brew an IPA that we were proud of. Tower 10 IPA is bigger and bolder than our previous IPA, and if you like hops, you’re going to love this,” said Brewmaster Paul Segura. The company announced that it will be replacing their Stargazer IPA, an English-style IPA, with Tower 10 IPA. 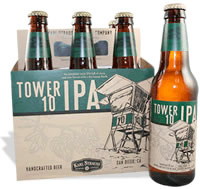 Karl Strauss decided to name their new IPA after lifeguard Tower 10 in Mission Beach where founders Chris Cramer and Matt Rattner began drafting their plans for the brewery back in 1989. 20 years later, Tower 10 is still standing and the company thought it was a fitting name for a bold new release making its debut 20 years after the original idea for the company.