Iron Hill Brewery & Restaurant, the popular food and drink destination with seven area locations, has announced the release of four lambic-style beers in bottles: Kreik de Hill, Lambic de Hill, Framboise de Hill, and Cassis de Hill. Iron Hill will host two release parties, at the Wilmington and Media locations, to give beer enthusiasts an opportunity to sample the different styles, speak with the brewers who created them and purchase the award-winning beers.

“It takes 3 to 4 years to make one batch of lambic beer. In the past, we’ve only offered these beers at special events,” says Director of Brewing Operations Mark Edelson, “We are excited to now be able to make them available to everyone who appreciates these great beers.” 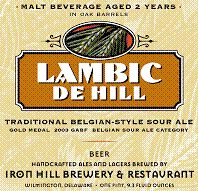 Iron Hill Lambic is a traditional Belgian-style lambic beer made with wild yeast and bacteria and aged in oak barrels for at least two years. It is golden-yellow in color and unfiltered, with a complex aroma of bananas, oak and hay and a nutty flavor that gives way to intense sour notes. 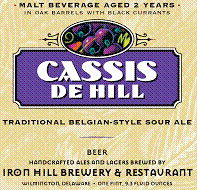 Cassis is a lambic-style beer that is aged in oak barrels with black currants, which lend the beer a violet color and berry aroma. 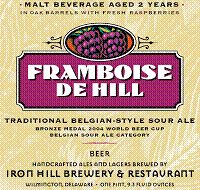 Framboise ages in oak barrels with fresh raspberries; it is ruby red in color and balanced between lambic sourness and sweet raspberry notes. 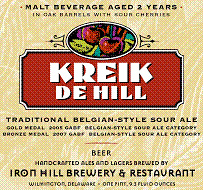 Kreik is aged in oak barrels with sour cherries, light red in color and also delicately balanced between sour and fruity-sweet.