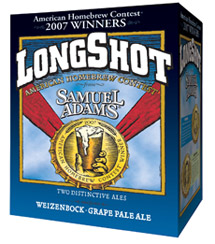 “It’s a bit overwhelming. The weirdest thing was when [Samuel Adams] sent me pictures of my beer on the bottling line. I saw thousands of bottles with my face on it.”
– Rodney Kibzey

The Chicago Sun-Times reports that Rodney Kibzey’s friends call him a “beer rock star.” Because Kibzey was a winner in the 2007 Samuel Adams American Homebrew Contest a Weizenbock brewed to his recipe currently is on shelves across the country.

Kibzey’s beer was one of two winners of a national homebrew contest. The other was an Imperial IPA and production of that one was delayed because of the hop shortage.