The Barrel Aged Old Ruffian Barley Wine was aged for 20 months in used barrels from Stranahan’s Colorado Whiskey, Colorado’s only whiskey maker. As it also does for the Yeti, the aging process mellows Old Ruffian’s edge while adding gentle notes of oak, whiskey and vanilla to the 12.7% ABV and 85 IBUs beer. (The original Old Ruffian won a Gold medal at the 2006 Great American Beer Festival and a Silver medal at the 2007 GABF.) 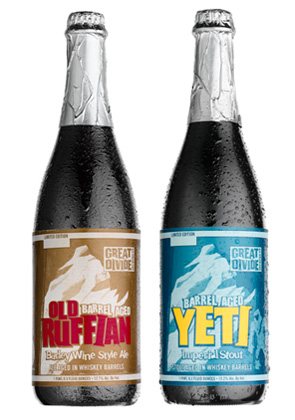 Barrel Aged Yeti Imperial Stout has also been aged for 20 months in Stranahan’s barrels. The rich and robustly roasted beer of 12.2% ABV and 75 International Bittering Units (IBUs) picks up flavors of oak, vanilla and whiskey through the extended aging process. These flavors add greater complexity to the already rich beer, while tempering its assertive nature.

Both of these beers are packaged in 750-ml bottles, then bottle conditioned for a natural carbonation and additional character. The two barrel-aged beers will be available in limited supplies (just 470 bottles of each beer) and will be sold only in Colorado. The suggested retail price for these beers is $25 per bottle.

“Our intent,” says Great Divide founder Brian Dunn, “was to age each beer in the barrels for 9 months. But we got busy with other projects, primarily the addition of a new bottling line, and the beers ended up aging for more than a year and half.” While the labels on the bottles state that the beers were aged 9 months in barrels, both beers were in fact aged 20 months in barrels.

“I think the beers really benefited from our procrastination,” Dunn adds. “When it comes to aging beers in whiskey barrels, I believe the longer the better. The additional time delivers a beer with more oak character than whiskey character, and that’s what we prefer.”

“These are not blended beers,” Dunn points out. “Each of these beers are uncut, 100% from the whiskey barrels.”