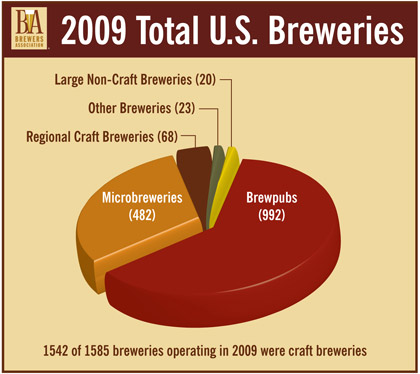 Overall, U.S. beer sales were down approximately 5 million barrels (31 gallons each) in 2009.

“Beer lovers continue to find great value and enjoyment in fuller flavored craft beers,” Brewers Association director Paul Gatza said for a press release. “Americans have an increasing appreciation of craft beers, and the growing number of brewers behind them. They’re eager to try the latest seasonal release and to sample a variety of beers from different breweries.”

Craft brewers, as defined by the BA, accounted for 4.3% of volume and 6.9% of retail dollars for the total U.S. beer category. The BA estimates actual dollar sales figure from craft brewers in 2009 was $7 billion, up from $6.3 billion in 2008.