Yesterday, Bill Leinenkugel, age 87, lost his lengthy battle with cancer and passed away. In 1971, Bill took over as President of the then-small Chippewa Falls, Wisconsin, brewery — Leinenkugel Brewing — that his great-grandfather founded. During his reign, he expanded markets, came up with the idea for the Leinie’s Lodge and oversaw a merger with Miller Brewing in 1988. After Bill’s retirement, his son “Jake” took over and is now the fifth-generation family member to do so. Until last month, Leinenkugel was sold in 38 states, and is still brewed in Chippewa Falls (though some is also brewed in Milwaukee). At the end of last month, Leinenkugel had nearly completed a national rollout of the brand at the hands of new owners MillerCoors. 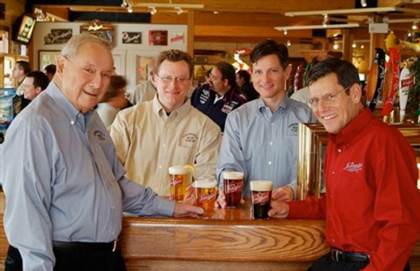 Bill Leinenkugel (at left), and his three sons, John, Dick and Jake, at the Leinie Lodge in Chippewa Falls.

One Reply to “Bill Leinenkugel Passes Away”