The Brewers Association, which tabulates industry growth data for U.S. breweries, announced that today’s small independent craft brewers are gaining alcohol market share due to a shift toward full flavor beer and increased support for local breweries. From 2007 to 2008, estimated sales by craft brewers were up 5.8 percent by volume and 10.5 percent in dollars. Overall share of the beer category from craft brewers was 4.0 percent of production and 6.3 percent of retail sales. More than 1 million new barrels of beer were sold in 2008, and close to half of those barrels were beer from craft brewers.

“2008 was a historic year for beer with the large brewers consolidating and imports losing share, while the top ten selling beer brands dropped in sales. At the same time, small independent craft brewers continued to gain share and attention,” said Paul Gatza, Director of the Brewers Association. 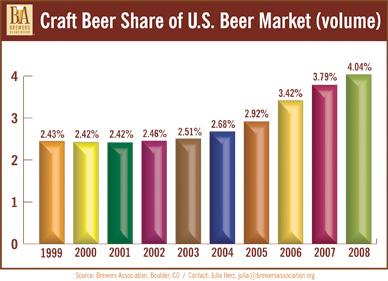 Beer’s popularity as America’s favorite fermented beverage continued in 2008 with Gallup stating “beer is back to a double-digit lead over wine.” Taking into account the challenges in today’s economy, BevincoNielsen released a survey showing beer was faring better than spirits, with wine lagging. The Brewers Association emphasized trading across from wine and spirits to beer continues, with some of today’s wine drinkers discovering the affordable enjoyment and rewards of craft beer.