Okay, I don’t know what happened, but I seem to have been deprived of the gene required to navigate large southern cities. First it was the chaos of Charlotte, now the sphincter tightening confusion of the Carolina Triangle. “The Triangle”, is the region in the Piedmont of North Carolina anchored by the cities of Raleigh, Durham, and Chapel Hill. It’s home to over 1.6 million people and our destination for All About Beer Magazine’s World Beer Fest, Durham. After navigating the highways and byways of The Triangle for a few days I feel it should be ranked up there with the “Bermuda Triangle” on the list of places you could enter and never be heard from again.

After circling Durham for a while, a town that even confuses mapquest.com, we stopped at the visitor’s center and got directions to the Historic Durham Bull’s Field, not the shiny new Durham Bull’s Stadium in the center of town, but the original Durham Bull’s Stadium (where the movie Bull Durham was filmed) down in a natural bowl on Corporation street. 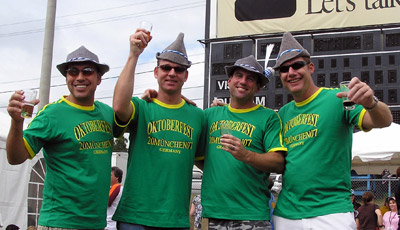 The event was sold out as usual. World Beer Fest has sold out in advance for both the Raleigh and Durham events in the past so if you plan to attend, buy your tickets in advance. 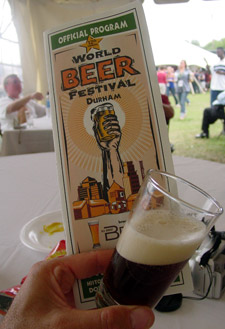 Bonne and I arrived about an hour after the first session started and the fest was in full swing. An overcast sky kept the temperature down in the eighty’s but it was a very humid. An immediate cry for beer burst from our poor west coast acclimatized bodies. We hit the tasting tables for something cool to sip while we pondered the WBF program and flight lists provided by Flying Saucer.

The clowns were there again, I really do need to ask the guys from All About Beer Magazine what the deal is with the clowns. At least they weren’t a surprise this time so I wasn’t so creeped out by them. There was even an cute girl clown there this time. Does it make me weird if I find a clown attractive? Boy oh boy, I need that beer more than ever now.

The pour is as black as burned coffee and light doesn’t penetrate it. Its burnt caramel foam head smells of caramel and roasted coffee. The taste is intense and bittersweet caramel, coffee and chocolate that fills the mouth followed by a great smooth finish, a really pleasing starter.

We found a couple seats over in center field and looked over the flights. Our choices were “Tar Heel Beers” (Nickname for North Carolinians), “Brews from Belgium”, “Culture Clash” (Bold American interpretations of European styles), “Hop Heads Delight”, “Going Green” (organics), “Classic British Ales”, “Not afraid of the dark” (a selection of dark beer styles), and my personal favorite, “You put what in my beer?” (There’s more to beer than barley, hops, yeast, and water.)

Neither of us really felt like sticking to a flight, or sitting under the tent where the tasting tour presentations that I enjoy so much were held. If you’ve ever experienced a truly muggy southern day you may have suffered what we were experiencing. Something I call high humidity madness. You can’t sit down, or even stand still, you’ve got to move, move, move, to create some airflow over your skin as the sweat pools and drips into every crease, fold, and crack on your body.

So, ducking in and out of the tents, (it was even worse in there) we worked our way down each row and selected beers strictly on a whim by whim basis. This lead to an afternoon of what we called “Russian Roulette” beer sampling. If it had a cool name, or there was no line, we tried it. We found some keepers, some blanks, and some duds. 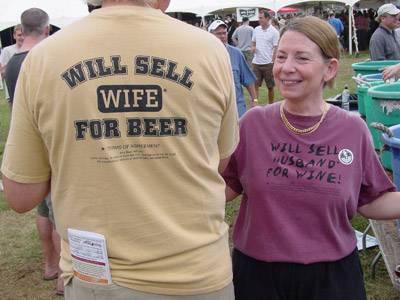 Here are some of the keepers:

Angry Angel, Big Boss brewery, North Carolina
This German-style pilsner is dry-hopped to increase the herbal flavor. Nice balance and a very unusual taste with a big hop finish. This is a very smooth, and refreshing beer.

Punkin Ale – Dogfish Head Brewery, Delaware
This beautiful orange/brown ale smells slightly of pumpkin with some nutmeg and cinnamon. The taste is nice and smooth with zero aftertaste, no hops I could detect. There was a slight pumpkin flavor along with toasted malt. Sam’s created a very drinkable seasonal here.

McEwan’s Scotch Ale
A dark brown ale with a smokey aroma mixed with malt and dark fruits that carries thru to the taste. An excellent scotch ale.

Sea Bee Honey Bock, Moonriver Brewery, Georgia
It was the giant mounds of peanuts they had at their booth that initially stopped us. Bonne’s fest favorite, the Honey Bock was a nice pause from heavily hopped beers. Mead-like in appearance and taste with enough carbonization to remind you it’s a beer. A very soft finish. I don’t know what the abv is but it’s probably high, watch out drinking this. It’ll sneak up on you.

The end of the first four-hour session came too soon and Bonne and I joined the throngs of happy fans streaming from the stadium like hundreds of thousands have in the past. Nostalgia and blessed air conditioning washed over me as we sat in our car afterwards and looked down on the old stadium below. Even with the heat, it had been a beery wonderful day in a unique and kinda quirky venue. There’s a quote from another Kevin Costner baseball movie that explains it, “if you build it, they will come.” All About Beer Magazine built a terrific fest and, boy oh boy, did they come. We’ll be back.