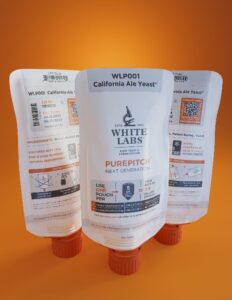 New Homebrew Size Features Resealable Cap and Double the Cell Count for Foolproof Fermentation for Small-Scale and Homebrewers
Bringing the innovation of PurePitch Next Generation (PPNG) packaging to home and small-scale professional brewers, White Labs has reimagined its homebrew size yeast to feature a resealable cap, exceptional breathability, double the pitch rate and verifiable quality at a value brewers will love.
From the industry’s first pitchable liquid yeast to a complete revolution in the way it’s propagated and packaged, White Labs brings 27 years of exploration and innovation to its newest creation, PurePitch Next Generation (PPNG) Homebrew, delivering verifiable quality and consistency in easy-to-use packaging specifically for homebrewers.
“Homebrew is where White Labs began, and while we’ve continued to expand our range of products and packages over the last 27 years through our tireless spirit of innovation, we wanted to ensure we were keeping smaller brewers in mind when expanding our PurePitch Next Generation innovations to homebrewers,” says Chris White, founder and CEO of White Labs. “While this product is intended for homebrewers, we put the same rigorous quality standards into every batch, which results in professional quality yeast that can be used by professional and homebrewers alike.”
Read more at White Labs