What would Ben Franklin have drunk? 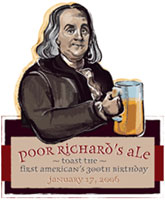 Perhaps something like Poor Richard’s Ale, the beer that officially goes on tap tomorrow to commemorate the 300th anniversary of Franklin’s birth (Jan. 17). OK, some of the 100 or so breweries across the country that brewed this special beer already have it on at others the beer isn’t quite ready to serve, but the Tuesday is the day to raise a glass to Ben.

So before you ask, here are a few answers.

Where can I find the beer?

Even brewing giants Anheuser-Busch is involved. Its St. Louis Brewery will offer Poor Richard’s Ale to guests who visit its Tour Center from 10 a.m. to 4 p.m. A special toast led by a Benjamin Franklin historical role performer and A-B brewmaster will be conducted at 1:30 p.m. to honor the real Benjamin Franklin.

How was the recipe chosen chosen?

The Brewers Association held a competition to identify a suitable recipe. A panel of award-winning brewers and others with an eye toward history chose the recipe for Poor Richard’s Ale.

The winning recipe came from Tony Simmons of Pagosa Springs, Colo., who is in the process of opening a microbrewery. Simmons carefully researched his recipe, citing more than a dozen publications when presenting his entry. He wrote:

“Ben Franklin’s favorite type of beer could have been similar in gravity and strength to the modern version of an Old Ale (1.060 to 1.086). Franklin’s own writings refer to, ‘the type of strong, harvest-time ale, or October ale.’ Yet, his regular drink couldn’t have been excessively strong because he was known to have intellectual discussions in Taverns while, ‘lifting a few pints of ale,’ and Franklin felt (along with many of the time) that ale was a healthful tonic if consumed in moderation. In researching the era, I believe that due to the high cost of imported hops and the documented hop shortages in Colonial America, the hopping rates would have been appreciably less than that of Old Ale and more comparable to a Strong Scotch Ale.”

Bill Brand, who writes for the Oakland Tribune and maintains a Beer Blog, was one of the judges and described the decision process, concluding:

“John Harris loved number two (the eventual winner) and eventually he brought the rest of the panel around. He blew away my phenol argument. This was Colonial Philadelphia, he said. Beer was made quickly, placed in wood casks and served in a tavern without benefit of refrigeration. An off-note or two was to be expected, he said. The problem with number three was it was too perfect; it was an excellent, very drinkable beer. Could it have been produced in Franklin’s day? That argument carried the day.”

What makes the beer different?

For one thing, molasses and corn. As Simmons noted, “Modern appreciation for the characteristic molasses flavor is limited at best.” However both were common in ale during colonial times and each would have helped to reduce the colonists’ dependence on imported British ingredients.

Will every batch taste the same?

You already knew the answer was no, but one brewery had a particular problem following the recipe. The Salt Lake City Tribune reported:

All of them except one will follow a recipe for Poor Richard’s Ale that emulates a beer the forefathers might have enjoyed after a heated democratic debate.

The exception – you guessed it – is Utah, where not even American history can trump the 3.2 beer law.

“The rest of the country is going back to colonial times, but we’re going back to Prohibition,” joked Matt Beamer, head brewer at Park City’s Wasatch Brew Pub, the only Utah brewery participating in the anniversary celebration.

Beamer said he would love to join his national brewing colleagues and make the original ale, which contains 6.6 percent alcohol. But since Utah liquor laws prevent that, “I’ve just decided to have fun with it,” he said.

The best part is that this beer will be enjoyed on draft in pubs and taverns, where people still gather to talk – about beer, the football playoffs, maybe even revolution – just as Ben Franklin and his friends did nearly 300 years ago.