You might already know that the name of bock beer comes from the German town of Einbeck. But did you know this?

“About the composition of Einbeck beer we learn that is was made two-thirds of barley malt and one-third of wheat malt, but lightly kilned, and was brewed only in winter. Of course, it was a top-fermented beer, ‘but very different from the top-fermented beers of nowadays,’ and is said to have been hopped very strong, and with hops that grew in the environs of Einbeck, where numerous hop-yards were in cultivation.” 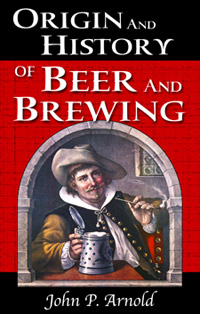 John Arnold wrote that in Origin And History Of Beer And Brewing, one of two books rich in beer history recently made available in reprint form from BeerBooks.com. The other is Louis Pasteur’s Études sur la Bière (Studies On Fermentation).

BeerBooks.comfounder Carl Miller said he has seen a strong and growing demand for rare and early brewing literature in recent years. We hope this is a sound business venture, because we’ve long benefited from his affection for beer history. Visit BeerHistory.com to see what we mean.

“We’re reprinting these works because beer enthusiasts have become more sophisticated in the types of material they seek out,” Miller said. “Many have moved beyond the contemporary books on brewing history, and want to go a little deeper. They want to get closer to the roots of the subject, and these books help them do that.”

Miller contracted with a leading library preservation institution to digitally scan, enhance and reproduce each book directly from a first edition copy. “We want readers to see the pages as they were first published,” he said. “Illustrations, original pagination, even graphic style and page layouts can be almost as important as the text itself.”

Arnold makes the scope of his book apparent in the introduction, writing he was guided by “the conviction that a history of beer ought to be written only by duly weighing the intimate connection existing with the general cultural history of those race, nation, peoples who habitually make and consume it, in so far at least as it is a history dealing not merely with the technical development of brewing.”

The book doesn’t contain much that happened after the 18th century and doesn’t try to be a comprehensive history – for instance, leaving much of what occurred in England to other texts.

It’s hard to imagine now, but before Pasteur proved them right in the mid-19th century, the few biologists who held that yeast was the cause of, and not the product of, fermentation were ridiculed. Manufacturers of wine, vinegar and beer didn’t know if a week or two after production they’d have something they could sell or would have to dump – and the scientific establishment offered no help.

That set the state for Pasteur to prove that living cells (yeast) were responsible for forming alcohol from sugar, and that contaminating microorganisms turned the fermentations sour. He identified and isolated the specific microorganisms responsible for normal and abnormal fermentations in production of wine, beer, and vinegar. He showed that if he heated wine, beer, and milk to moderately high temperatures for a few minutes, he could kill living microorganism and thereby sterilize (pasteurize), the batches and prevent their degradation.

It should be surprising that the sub-title of is The Diseases of Beer, Their Causes, and the Means of Preventing Them.

In the preface, he writes: “I need not hazard any prediction concerning the advantages likely to accrue to the brewing industry from the adoption of such a process of brewing as my study of the subject has enabled me to devise, and from an application of the novel facts upon which this process is founded. Time is the best appraiser of scientific work, and I am not unaware that an industrial discovery rarely produces all its fruits in the hands of its first inventor.”

As Randy Mosher points out in Radical Brewing, ancients were clearly aware of the magic yeast (the Sumerians had 50 words for it) performed. But today we’re happy today to still marvel at that magic and not end up with sour beer (unless, of course, that’s what you want). You don’t have to read Pasteur to understand why, but it’s as close as we’ll ever come to listening to him discuss his breakthrough work.

Be warned that these books are neither light nor necessarily easy reading. Pasteur was writing late in the 19th century, in French and interested in communicating with scientists and brewers trained in science. Arnold first wrote Origin and History in German, then it was translated into early 20th century English.

And, for obvious reasons, you won’t find anything about modern brewing practices or beer’s role in contemporary society. Arnold makes reference to the temperance movement that would soon bring Prohibition to the United States, but obviously you won’t find him comparing the roles of spirits, wine and beer in American society with that after Prohibition was repealed.

You’ll have to connect the dots. If Miller is right, a growing number of beer enthusiasts are inclined to do that.

One Reply to “Weekly Therapy: Books and history”