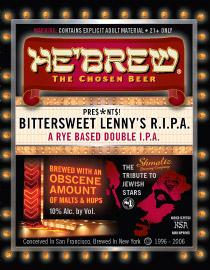 Genesis 10:10– A radical evolution of the company’s top selling Genesis Ale, Genesis 10:10 offers a huge balance of specialty malts, pounds and pounds of American hops, and is brewed with the juice of over 10,000 luscious Pomegranates. In Jewish tradition, pomegranates symbolize righteousness, appearing throughout Torah as well as in many world cultures.