Anyone who’s ever been to Eugene, Oregon can tell you it’s not average in any way shape or form. Portlanders, a hundred miles north, call Eugene, Hippie-town. Cupped in the palm of the southern end of the beautiful Willamette Valley, Eugene’s a university town that draws extremes of every type. It’s also a place where somehow those extremes manage to coexist if not always amicably, at least with a mutual respect. Eugene is where I live and the home of the Sasquatch Brewfest.

The Sasquatch Brewfest began 4 years ago and is dedicated to the memory of Glen Falconer, an innovative and creative local brewer well known throughout the brewing industry. Glen, whose nickname was Sasquatch, died in a tragic accident in 2002. Soon after his friends and family created the Glen Hay Falconer Foundation to commemorate Glen’s life and support the craft he so passionately pursued.

The Glen Hay Falconer Foundation promotes several Sasquatchic events each year. A golf/beer drinking tournament during the Oregon Brew Fest called the Sasquatch Brew/Am, the Sasquatch homebrew competition, the Sasquatch/Siebel scholarship competition for professional and home brewers of the Pacific Northwest (including Alaska and Hawaii) and Northern California, and the crown jewel event … the Sasquatch Beer Fest.

The fun started on June 1st, Friday night, with the brewer’s dinner. It was a small gathering of enthusiasts and professionals held at the Mallard. The paired appetizers and entree’s were as follows:

Boy did I pick the wrong week to go on a diet! Thankfully the spirit of Gambrinus had, thru liquid lubrication, loosened my grip on dietary resolve and I was able to enjoy the evening without the nagging guilt that accompanies such rich indulgence. Of course, the fortunate coincidence that my nagging guilt had to study for a test that night and couldn’t attend helped a lot.

Though some of the paired beers weren’t something I’d usually drink, paired with the food they were all absolutely delicious.
The first beer of the meal, Arlen’s triple came with a friend. A Gueuze (yet to be named) Arlen Harris brewed at Issaqua Brewing Company, which came with a story worth sharing. The Gueuze, a wheat with hints of coriander and cumin, had spent a year fermenting in an oak barrel at the brewery.

Arlen figured it must have been during the Christmas party that some young wannabe brewers knocked off the airlock and contributed what may have been the most unusual ingredient you’ll ever find in a beer. I don’t think even Sam Calagione, a name synonymous with weird beer, could have come up with adding red and blue Lego’s to the mix.

Try as I might as I sipped the tart tasty result, I could not detect a trace of acrylonitrile butadiene styrene (aka Lego plastic), but I did feel the urge to bond with several of the more attractive wait-staff in the room. Coincidence? I think not! 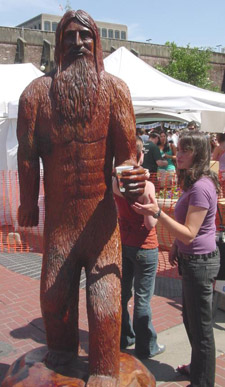 Saturday June 2nd was as fine an Oregon day as you could ask for, perfect brewfest weather. As I approached the center of downtown Eugene where the brewfest is held on a 100 foot square postage stamp of land called Kesey Plaza, I spied the familiar wooden Sasquatch statue that marked the entrance to the fest. A line of eager beer enthusiasts jabbered excitedly as they waited for their REAL GLASS sampler. (When’s the last time you got one of those? Guess what, I didn’t hear one hit the ground all day!)

The brewfest may be small in square footage but the beers are chosen with care to reflect the best creative examples of the brewer’s art. The crowd was the usual Eugene mix of regular and not-so-regular citizens commingling into a harmonious mass of beer-happy humanity.

The first beer of the fest for me had to be the Sasquatch Legacy Imperial Steam, made by Walking Man Brewing especially for the Sasquatch Fest with ingredients donated by Wyeast, Hopunion, & Great Western Malting. 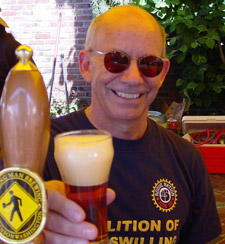 I was more than a little surprised and delighted to find MY congressman, Pete Defazio pulling tap on the other side of the jockey box.

The Sasquatch Legacy Imperial Steam is described as a hoppy, strong (9.2%abv) Northwest version of the California Common beer. As I rolled it around my mouth another beer came to mind, Steelhead’s Hopasaurus Rex, a highly hopped, high alcohol (also 9.2%abv) IPA made right there in Eugene and as luck would have it also was being poured at the festival. I found the tap and compared the big IPA to what I’d just had. Close but there were definite differences in aroma and citrus and floral notes, but they were very close in many ways.

My un-expert opinion; If you like Hopasaurus Rex, you’re going to like Walking Man’s Sasquatch Legacy Imperial Steam, and if you like big Northwest beers you’ll love them both.

After a much needed palate cleanse I planted myself in front of the bandstand with my final beer of the day, a glass of Lagunitas Brewing Company’s Brown Sugga (200 pounds of brown sugar in each 30bbl batch and 10%abv) and listened to a band called Spun Honey crank out a perfect rendition of Pink Floyds Comfortably Numb. The beer was soft, malty, and smooth. Never giving any hint of the pile driver punch beneath the velvety taste. The music mixed with the beer and I found myself thinking of Glen Falconer. He’d sure be proud of the big little brewfest that bears his name. 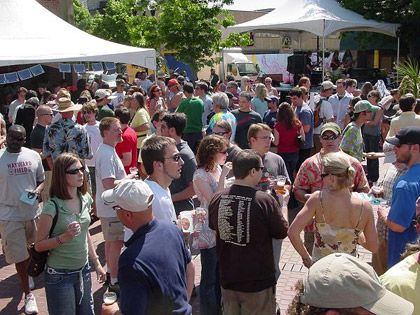 One Reply to “Sasquatch Brewfest”