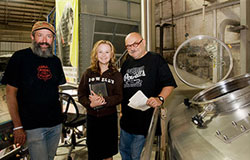 White Whale Ale is infused, literally, with the spirit of the book “Moby Dick.” Michael and Emily Powell took pages from a copy of the book and, along with Rogue brewmaster, John Maier, added them to the brewing kettle at Rogue. “Moby Dick” has special meaning to Michael Powell, who was inspired to become a bookseller when he found a first edition of the novel in a box of books he’d purchased.

White Whale Ale was brewed in honor of Powell’s Books 41st Anniversary. Powell’s is the one of the world’s best known independent bookstores. Its flagship store in downtown Portland, Oregon, covers an entire city block and contains more than one million new and used books.