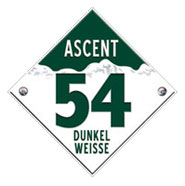 Anheuser-Busch has added another specialty beer to its “reigional only” lineup.

Its Fort Collins brewery brewed a German-style dunkel weisse called Ascent 54 for distribution in Colorado. It will be sold only on draft. The beer is made with 50% malted wheat, combined with Munich, caramel and chocolate malts. The hops are German Hallertau-Hallertau and Hallertau-Tettnang. A Bavarian weisse yeast strain was imported for fermentation.

The name refers to the 54 14,000-foot high peaks in Colorado (known as 14-teeners or simply “teeners”). The tap handle features a climbing axe embedded in a mountain rock, with blue and white diamonds on the handle. The rock symbolizes the ruggedness of the Rocky Mountains. A diamond-shaped plaque positioned in the center of the rock displays the beer’s name and is similar in color and typeface to the Colorado license plate.

In addition to paying homage to Colorado’s peaks through its name and tap marker, Ascent 54 is supporting the Colorado Fourteeners Initiative (CFI), a non-profit organization that maintains and improves hiking trails and educates the public about minimum-impact use of fragile mountain areas.