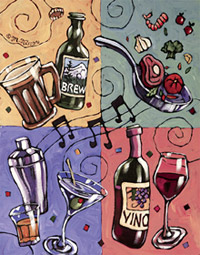 Take a native Oregonian with time on his hands like Steve Woolard, weaponize him with a passion for great food and drink, and assign him the mission of educating the community about great Northwest fare and you’ll have some idea of what the nation’s largest springtime sampling event, The Spring Beer & Wine Fest, is all about.

The event started in the spring of 1994 as the Spring Beer Fest, the “& Wine” wasn’t added until 2001 when vintners and wine became more prominent. Another addition to the Spring Beer & Wine Fest that same year was the Culinary Stage where Master Chefs create dishes using the beverages available at the festival.

Though the Fest has been around for quite some time it was my wife Bonne, and my first trip to the event. The Oregon Convention Center seemed cavernous as we walked what seemed like a mile from the elevators to the hall that held the event. I was surprised that, after 14 years, the event wasn’t as big (or as loud) as many of the other festivals I attend. In fact the size of the room seemed to dwarf the actual event. There seemed to be plenty of people in attendance but the space and the layout kept people dispersed and allowed for a comfortable expectation of personal space.

The Fest lived up to its motto “A Taste of the Best,” as we sampled top-shelf local and regional wine, beer, spirits and food. What does an education taste like? Well, I’m used to beer festivals. Places where bratwurst, BBQ, pretzels, and chili-fries reign. To be fair I have been to wonderful tastings pairing beer with cheese, chocolate, and all sorts of wonderful things, but this was something different. 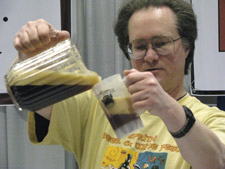 We’d select a beer then stroll over to one of the many food booths to combine flavors like Mom’s Booze Balls (who could resist?) with Rogue Shakespeare Stout, and Pelican Doryman’s Dark Ale with a bite of Rogue Creamery’s Pesto Cheese Curds. Oh…My….God! I could go on and on, and we did.

I wanted to attend the seminars like the Cheese Smackdown, a “battle” between wine and beer experts as they match their beverages with selected cheese, letting the audience decide which pairing is best which is described by fest Marketing Director Lisa Morrison as “kind of like the American Idol of food.” Other seminars like Chocolate 101, Classy Cocktails With Indie Spirits and the panel discussion on beer and food pairings were forgotten as we conducted our own little seminar called, “what do you think would go good with this?”

Time flew! The next thing I knew, 5 hours had gone by and it was time for us to go meet friends. Next year I’m going to allow more time and actually attend the planned seminars. Probably, maybe, okay I make no promises. The Spring Beer & Wine Fest has so much going on that it’s just too much fun running around. I guess I’ll have to come for both days next spring just to be on the safe side.

Despite the brew’s bitter name, the win is an especially sweet one for owner Steve Allen, who lost his brewer right before the Spring Beer & Wine Fest. Allen was considering having to miss the fest this year after he learned that they didn’t have enough of the award-winning beer for the festival. But in true “beer community” spirit, a Portland-based brewer from another brewpub, Vasilios Gletsos, stepped in and brewed up a batch of “the bitch” just in time for the fest! 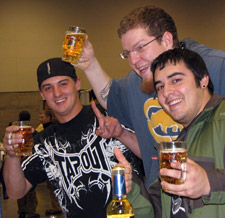 The competition was a tight one this year, with many beers garnering numerous votes. Bitter Bitch only beat the second-place winner, Hopworks Urban Brewery’s Survival Stout, by three votes!

The People’s Choice Award is the result of ballots fest-goers submit as they are sampling among the more than 80 beers at the Spring Beer & Wine Fest.