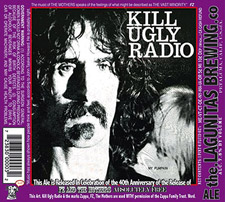 As promised last year, Lagunitas Brewing in California has released the second beer in its Frank Zappa series.

Lagunitas founder Tony Magee obtained the permission of the Zappa Family Trust to use the original album art for both.

The beer itself? A hefty 7.8% and not surprisingly brimming with West Coast hops, a blast of citrus and Northwest pine, and unapologetic bitterness.