“We are deeply committed to sustainability and when building the Portland Pub, we drew on the experience we gained during the Oregon Tilth certification of our Bend brewhouse,” says Deschutes Brewery founder Gary Fish. “We built our Portland Pub with the goal of going organic and our menu continues to feature local and sustainable products whenever possible.”

Nearly nine months after its grand opening in the Pearl District, Deschutes Brewery is Oregon Tilth certified and now the only organic brewpub in Portland’s trendsetting neighborhood. Brewer Cam O’Connor is itching to brew a batch of Deschutes’ popular Green Lakes Organic Ale, which uses Salmon-Safe certified Sterling hops, and experiment with recipes of his own on the pub’s 12 barrel batch system. 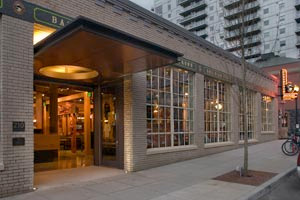 In addition to its recent organic certification, the Portland Deschutes Brewery and Public House has built on its dedication to being environmentally friendly by collecting and giving the spent hops and grains from the brewing process to a local cattle farmer to be used as cattle feed and compost; the beef raised on these spent grains are then purchased by the brewery and used in the pub kitchen. Other environmentally friendly features include an energy capturing system in the brewery that reclaims heat, which is used to pre-warm the wort on its way to the kettle. Energy Star rated kitchen equipment and HVAC systems reduce the pub’s overall energy consumption. The Portland pub has also operated on 100% PGE renewable energy since the day it opened.

The Portland pub was recently recognized at the Oregon Chapter of the AIA/IIDA 2008 Annual Design Awards, where the project and Emmons Architects received a merit award in the restaurant category. The AIA/IIDA awards highlight outstanding design and architecture projects from across the city.