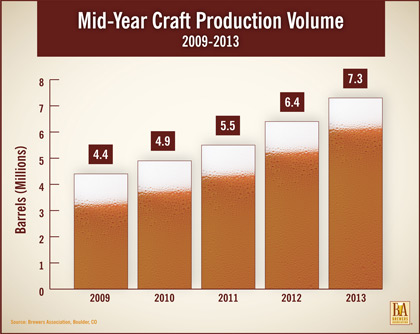 Just to be clear, the date on this story is July 29, 2013. The upward march of craft beer (per the Brewers Association definition) sales has been so relentless that some days you feel a little like Bill Murray in “Groundhog Day.”

Sales increased 13% in volume in the first half of the year, and 15% in dollars, according the information released today by the BA.

“Demand for beer produced by small and independent brewers has never been higher, as evidenced by increased production and the hundreds of new breweries joining the playing field each year,” said Paul Gatza, director of the Brewers Association. “Beer drinkers nationwide are responding positively to high-quality, full-flavored, diverse offerings from American craft brewing companies that continue to innovate and push the envelope.”