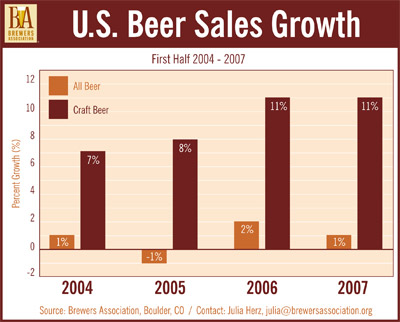 Craft beer sales soared in the first half of 2007.

It’s starting to seem like something other than news. But the Brewers Association did in fact have something new to report today when it released first-half data: For the first time ever craft beer has exceeded more than a 5% dollar share of total beer sales.

Scan data from Information Resources, Inc. provide confirm that craft beers sales are rocking. Craft sales in the supermarket channel through July 15 showed a 17.4% increase in dollar sales compared to the same period in 2006.